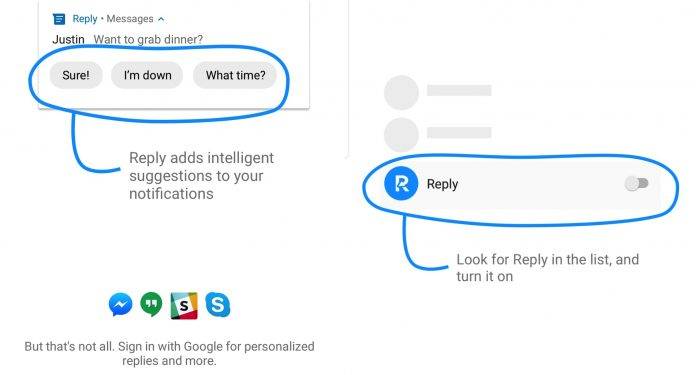 Messaging on your Android phone can be more fun than ever once this Reply feature becomes more widespread. You can’t find the app anywhere on the GooglePlay Store but the APK is now available. This app feature is believed to be ready to support other messaging and social media apps like Allo, Telegram, and Instagram very soon. It’s something most of you may probably have thought about before and even tried to work on and develop a working app but it’s only now the tech giant is making it happen.

Google hasn’t made any formal announcement yet but we all have genius devs doing APK teardowns. Because of them, we can gather Reply may be supported in other major messaging apps such as Google Allo, Blackberry Messenger (BBM), Instagram, Facebook, Kakao, Telegram, Signal, and Wechat among others.

The app is still in beta so expect some bugs and issues. One thing we’re sure about ‘Reply’: it will allow users to quickly and easily send a smart response. It will come handy during those times that you’re too lazy to type and send a reply. It may work hand-in-hand with the notification settings of an Android device so we’re guessing it still needs tuning-up.