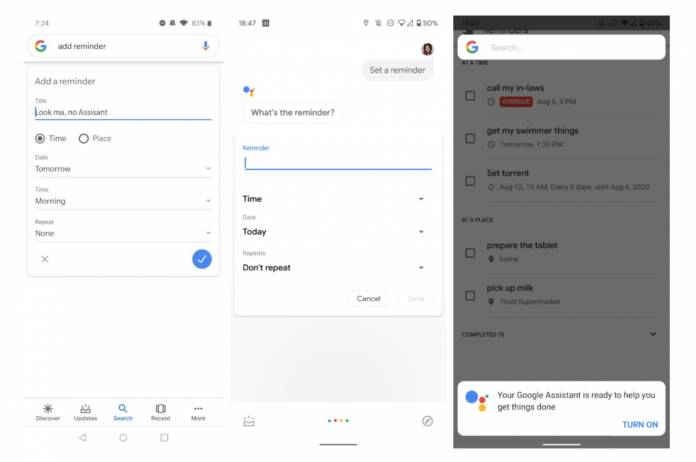 If you’ve been using Google’s reminders app to help you manage your productivity routine, it’s worth noting that there are some new things to the latest update which might be good or bad news for you. One of the good things about it is that the notifications are now unbundled so you can separately tackle each one of them. However, one noticeable change is that the reminders now have to go through Google Assistant and if you don’t have the latter enabled, then you won’t be able to see or edit it.

A post on Android Police explores the changes, both good and bad, to Google’s reminders. The good news is that the new interface now users larger fonts and instead of just the hidden swipe gesture, you now get checkboxes next to each of the items. You also now get white space instead of a grey divider between the time, place, and completed reminders which is nicer visually. You also get the Google four-colour plus sign for the floating action button plus new icons for time, place, recurrent reminders, and a big red button for the overdue items.

Now for the bad, or at least the major change. Google now seems want your reminders to go through Google Assistant. So if you don’t have it enabled on your device or you are in a region where it isn’t available, you won’t be able to view and edit your reminders. At least if you just have it disabled, it will prompt you to turn on your Assistant but if you don’t have it at all, that will be a problem. Adding or editing a reminder will take you straight to your Assistant.

Place reminders also seem to have disappeared. Previously it was part of the interface but now if you want to add a place reminder, you have to tell Assistant to “remind me to (action) when I get to (place name”. When editing a reminder, there is no drop down or a suggestion bubble. It can be annoying at times especially when you’re used to the old interface, so hopefully this is not a permanent thing.

With this update, you win some, you lose some. In the win category though you can now just uncheck a supposedly done already task and get it back to the ongoing or current reminders. The update is rolling out server-side so you just have to wait it get to you.