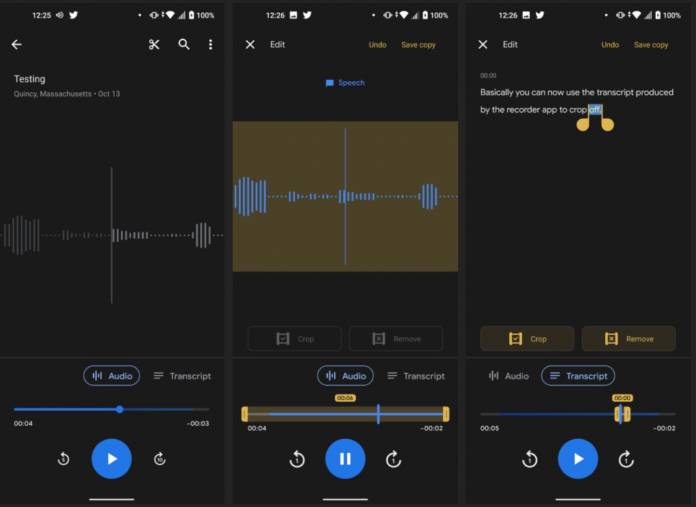 The Google Recorder is a pretty good tool to have when you need to, well, record something. One of the features that it has is an automatically-generated transcript that can come in handy for writing reports, understanding lectures, or even noting down the things that you yourself recorded. It’s been a while since the app has gotten an update but the newest one is a major one as it is version 2. With it comes the ability to edit your audio recording not just in waveform but also in words.

Android Police shares that version 2 of Google Recorder is already rolling out to Pixel users. The app hasn’t made its way to non-Pixel Android phones just yet although the rest of us are hoping it eventually will. For now though, the update is available to select users only although there’s also an APK available to sideload it on your Pixel device. There seems to be a problem if you’ll do that on a device running on Android 11 so better wait for the rollout if your Pixel is already on the latest Android update.

How the new editing feature works is pretty simple. When you’re reviewing either the waveform version or the generated transcript, you’ll see a scissor icon at the top. When you tap on it, you’ll go to the editing interface. All you have to do is select a part of the recording then crop it or remove it from the timeline. The lasso method is applicable to both the recording and the text version of it.

As mentioned earlier, sideloading on a device that is already on Android 11 may be problematic for now. This may be because version 4 of the APK signature scheme does not have the new signature file that the OS is looking for but that should eventually be fixed as well. If you have a Pixel running on Android 10, installing the APK shouldn’t be a problem.

For now, you’ll have to wait for the official update to roll out. You can try to update or download it from the Google Play Store but it looks like the update is still rolling out slowly.