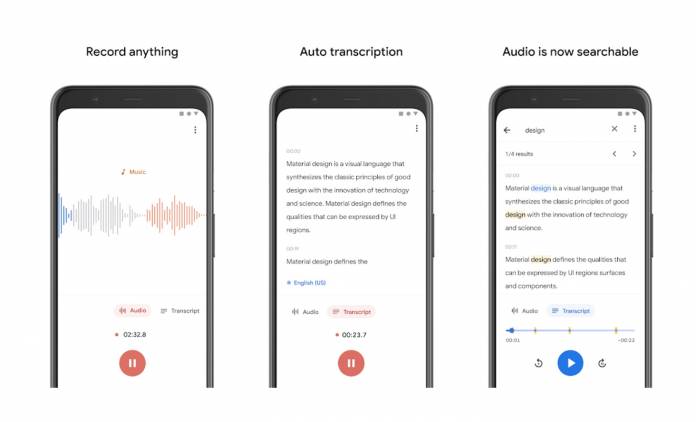 If you have a Pixel 4, you have probably been enjoying the Google Recorder app which is one of the most useful features that came with the new Made by Google device. They promised that the feature would be available for older Pixel devices and now it looks like that promise has been fulfilled. The app is now available in the Google Play Store and if you have a Pixel device, you will finally be able to install it and use the auto-transcription feature that people have been raving about.

According to 9 to 5 Google, the initial update to the app was so users can sideload the app on their device or have Pixel 4 owners fresh install it into older Pixel smartphones. But a later update finally allows Pixel 2, Pixel 3, and Pixel 3a users to install it from the Google Play Store directly. Original Pixel users seem to be left out in the cold but a future update may also include them in the Recorder party.

What is so great about this Recorder app anyway? Aside from letting you record things like lectures, interviews, even conversations (with consent of course), it will auto-transcribe these recordings using speech-to-text technology. Even better, the transcription is done locally meaning it’s not being sent to the cloud so any privacy and security concerns should be laid to rest. The transcription has a “high level of accuracy” so that should solve some problems as well.

While there are third-party apps that can do this, most of them are not always free and the aforementioned concerns about privacy are there. So having a Google-powered app that is free is a plus point for the Recorder app. And if you don’t feel like upgrading your phone to the Pixel 4 just yet, at least you’re now getting more of the features with the December security patch, including Themes, an updated Pixel Launcher, and Android 10 gesture support for third-party launchers.

You can download the Recorder app from the Google Play Store for free. Unfortunately, if you don’t have a compatible Pixel device, you won’t be able to do so. Let’s see if they will eventually make it available for other Android devices as well.