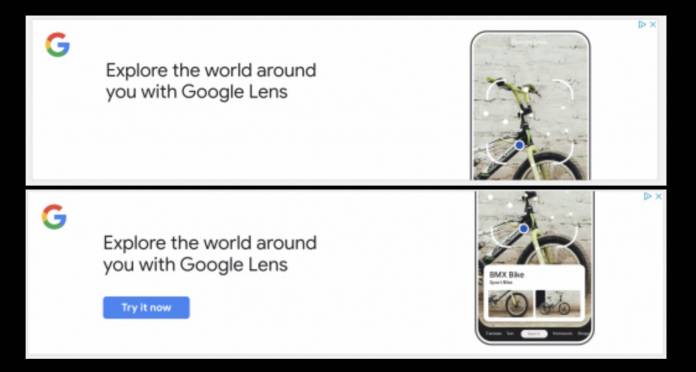 Google Lens has been around since 2017 and has been a good tool for those that wanted to do visual searches more than word searches. And with Google’s continued push for augmented reality, it will most likely play a pretty important role. The challenge would be to make people actually use it. Google has now released some pretty straightforward online ads on how and why you should use Google Lens, instead of the more “spectacular” ad experiences that they previously released.

9 to 5 Google says that this latest online ad push is a little more functional and straightforward than previous campaigns. It has the tagline “Explore the world around you with Google Lens” and comes with a short animation of how it works. It shows how Lens can tell you that the bike you’re pointing your phone at is a BMX bike and then ends with a “try it now” button. Previous ad campaigns for Lens were much more elaborate, from a tie-up with Stranger Things to Living Surfaces print ads.

This latest ad campaign may be due to the news that Apple is introducing a similar feature when they release iOS 15 this fall. So as early as now, they’re letting people know that they did it first and have been doing it for four years already. While this online campaign is more direct and simple, there’s also a more high-profile campaign in the UK in real-life locations with a focus on
Augmented Reality search.

You can find Lens in several parts of your device. You can use it on Google Photos, Google Assistant, default camera apps, as a home screen icon, and even in the Google Search app on iOS. We don’t know yet how Apple is integrating it but it’s most likely a default feature so Android will have that against it as it’s a “separate” feature built into some of the apps. Hence, the need to show in online ads how easy it is to actually use it.

We can expect more ads and demonstrations about the joys of Google Lens soon. And if you haven’t used it lately, why not give it a try now.