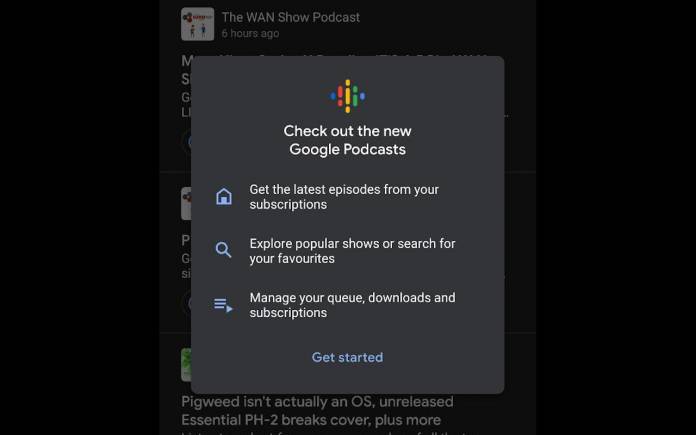 The pandemic has forced many people to stay at home and spend their time binging on videos, at least for those who don’t have to work from home in the meantime. Not everyone, however, wants to spend their free time burning their eyes. Some prefer to give their ears a workout, sometimes even to learn a few new things. Just in time for this period of increased digital consumption, Google is slowly rolling out an update to its Podcasts app that not only changes the way it looks but, more importantly, the way it behaves as well.

Google’s dedicated podcast app was very late to the game and, for a time, sat uneasily between Google Play Music and YouTube Music. With this latest update, however, it takes a step closer to becoming a more full-pledged player in that rather congested market.

The new Google Podcasts simplifies the UI to three bottom tabs, which seems to be the trend these days. Above that sits a simplified player that shows the current playing episode. Instead of the old boxes, podcasts and episodes are displayed in a scrollable list, which each item including an option to play it immediately or add it to lists.

Beyond the UI reshuffle, Google Podcasts also gets new features, the biggest of which is the ability to Auto Download new episodes. Conversely, it also comes with auto deleting episodes so that your phone storage won’t fill up over time. You can also manage notifications for new episodes per subscription to keep information density to your liking.

The updated Google Podcasts experience is still in the process of rolling out widely. It does lack the more sophisticated podcast management features of apps and services like Pocket Casts but, in exchange, it offers Google’s brand of simplicity and, another recent addition, a web-based player.