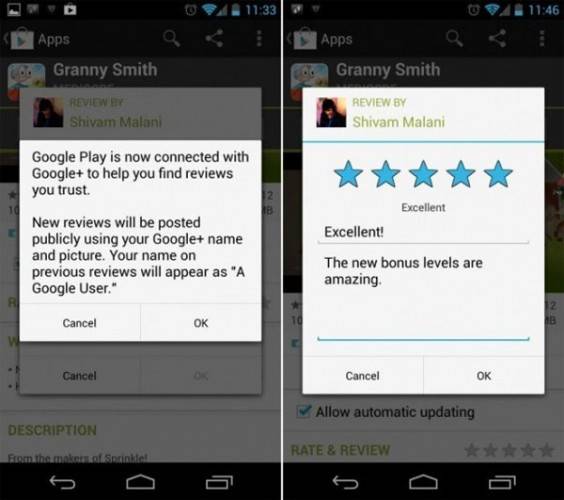 Gone are the days of leaving anonymous review on the Google Play Store. Now, Google’s application store show Google+ profile photos and names on reviews, so no longer can users hide behind some made up user name. Google rolled out a similar feature on YouTube where users could opt to use their real name from Google+ when uploading videos, and now that same feature has arrived on Google Play.

Any review left on Google Play will feature your real name, or at least, the name you used when you signed up for your Google+ account. This should help keep users’ reviews more honest since they are no longer using an anonymous username. It could work the other way, where people reading the reviews might trust them more since they can see the name and photo of the reviewer.

This change applies to both the mobile and browser-based versions of Google Play. This means there is no escape, if you want to leave a review, you will be doing it with a Google+ profile. If you have no left a review since the change went into effect, you will receive a message stating, “From now on, reviews you write will be posted publicly using your Google+ name and picture.”

One last thing to note is that, unlike YouTube, this does not appear to be optional. For people who prefer anonymity online, this is probably not going to make you too happy. However, as long as you are not the type who liked to troll Google Play reviews, this should not be a big deal.