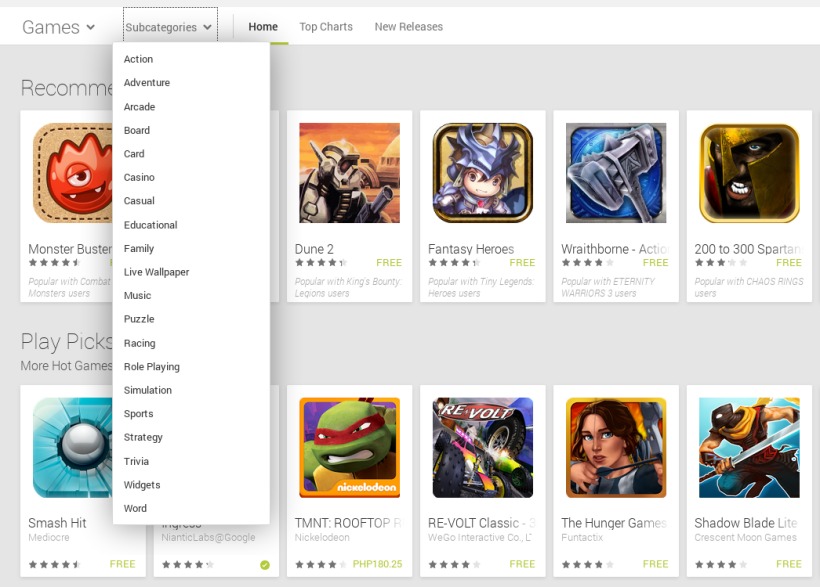 Google has just pushed out a silent update to Google Play Store both the Android app and the browser interface that brings a slightly new organization to games available in the store. These 18 new categories will hopefully make discovering new kinds of games a tad easier than before.

There is no disputing that Android has a lot of games available, ranging from ports from PC or console games, to movie tie-ins, to truly original ones, to knockoffs. Wading through those hundreds of games in search for interesting titles, however, is no walk in the park. Well and good if you know the exact title, developer, or description. But trying to look for games of particular genres using just the search feature can be a bit of a hassle.

Fortunately, Google has now updated its old game subcategories in line with new features introduced in the Google Play Game services update. Previously, there were only 8 very broad subcategories, including some things that probably shouldn’t be there, like Live Wallpaper and Widgets. Google has now expanded the list to 18, which are really all game related. This list includes Action, Adventure, Arcade, Music, Role Playing, Simulation, Strategy, Puzzle, Educational, Card, Casino, Casual, Board, Family, Trivia, Word, Racing, and Sports.

Google has made these changes available in time for the Game Developers Conference 2014 happening this week. Though the new list probably won’t be bringing in a flood of new Android gamers, it should at least make the whole gaming experience less tedious for current users and more welcoming to new ones.