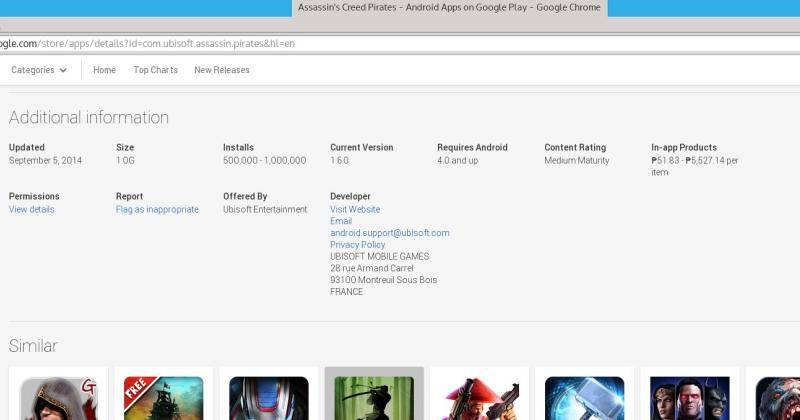 As hinted before, Google has finally pushed changes to Play Store, both on the web and on mobile, that try to assuage the concerns and complaints of consumer rights advocates and government bodies. These changes include a simple range of prices on in-app purchases and, perhaps a tad more worrying, physical addresses of the app’s developers.

The new price range feature is a good first move but comes up slightly short of what users would perhaps want, especially considering a slightly better equivalent feature in iTunes App Store. At the moment, all that Google has done is to update the Details page of apps with IAP to show the minimum and maximum prices of items that can be purchased inside the app. In contrast, the App Store provides a more detailed listing of each item and the corresponding price, giving interested buyers a better idea of what they’re getting into. Hopefully, Google will move towards something similar, if not better.

The second change is perhaps a bit more contentious. For the sake of better accountability and to comply with consumer protection laws, Google has not only started requiring developers of paid apps or apps with IAP to put in a real, physical address associated with the account but also displayed that address in the same details page for everyone to see. That piece of information is actually already included in Google Wallet receipts for every purchase made, but it’s quite another thing to have it visible even for those not buying the app.

There are a few caveats to this change. First is that it only affects developers of paid apps or apps that offer in-app purchases, leaving free app developers to continue to revel in relative anonymity. The second is that Google only requires a real, physical address, not exactly a home address. This means those developers can most likely use a PO Box, although Google has not yet clarified this option. Nonetheless, it still becomes a worrisome issue especially for lone or indie developers. There are suggestions that there are ways for Google to comply with those said laws without divulging developers’ addresses in such an easily accessible manner. Whichever way the issue goes, Google is giving affected developers up to the end of the month to comply or risk having their apps delisted from Google Play Store.