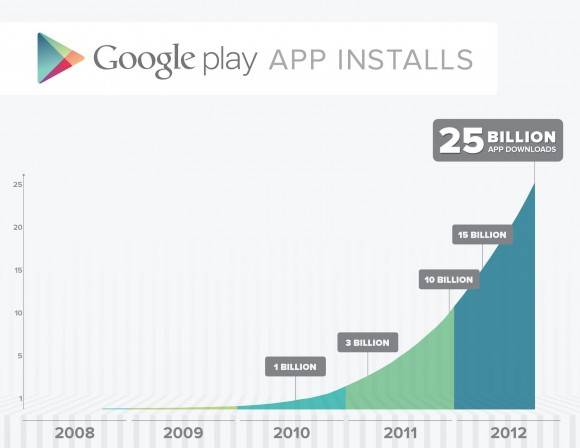 Android users have been frequenting the Google Play Store in a big way, with Google announcing that the store has hit 25 billion downloads. That may not seem like a big deal when you remember that the Apple Store hit 25 billion downloads earlier this year, but it’s important to keep in mind that back in 2010, the Google Play Store was only at 1 billion downloads. That’s a pretty significant jump in user activity (and, by extension, consumer adoption of Android), so it’s only fitting that Google kicks off a new promotion to celebrate this milestone.

Starting today, a selection of the 675,000 apps on the Google Play Store will be discounted to just $0.25. New apps and games will drop to $0.25 each day, and Google has secured some pretty big names to participate in this promotion. Looking at the list of today’s discounted apps, we see that titles like Angry Birds Space Premium, Asphalt 7: Heat, and Draw Something have all be discounted, and publishers including Electronic Arts, Full Fat, and runtastic have all signed on for upcoming deals.

That’s definitely very exciting, but if deals on apps don’t do much to pique your interest, then Google has some other deals on offer. Google will be dropping the prices on eBooks, movies, music, and magazines throughout the promotion, keeping with the 25 theme and offering them in collections such as “25 movies you must own.” Our friends at SlashGear point out that prices probably won’t go down to $0.25 with this additional content, but you can expect some sweet deals nonetheless.

At the moment, there isn’t any word on when this promotion will end, so we’re just going to go ahead and hope that it continues on forever. As we said above, new deals will be ushered in every day, so be sure to check the Google Play Store frequently to avoid missing out on any particularly great deals. Have a look at our story timeline below to read more about the Google Play Store.