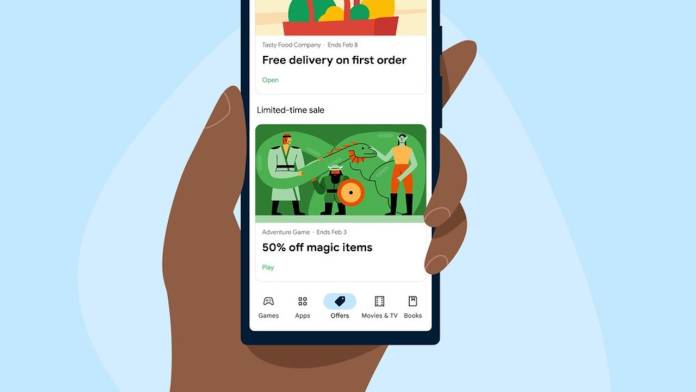 Google Play Store is a huge marketplace with millions of apps, games, media, etc to install on your Android device. But discoverability and searchability can sometimes be an issue, especially for good sales and deals from developers and publishers. Now they’re introducing a new Offers tab that will help users find the best, well, offers for apps and games across various categories like travel, shopping, media & entertainment, fitness, and other deals that you can get on the Play Store.

The Offers tab will be rolling out to users in select countries but Google is looking at bringing it to more territories throughout 2022. You will find sections like “offers for apps you might like” which are deals that may be relevant to you based on your download and search history. They said they are partnering with developers of some of the top apps and games that are available on the platform but hopefully indie developers and distributors get their fair shake too.

Some of the deals that you’ll see in the offers tab include limited-time sales on apps and in-app purchases, with the latter dealing mostly with tokens and items that you can find and use in games. You’ll also see apps that will be offering things like free delivery, free rides, bundled offers, and various rewards. You will also see what movies and books are discounted, either for buying or renting out. The tab will also show apps offering 30 day free trials or free extended trials.

The Offers tab will help users find all the best deals that the Play Store can offer. But it’s also a chance for the apps to be discovered if they have special offers to attract new users and keep current ones. Discoverability is really tough on the platform since there are tons of apps to choose from and to browse so hopefully this is another way for apps and games to get an audience by offering discounts, freebies, and other marketing tools they can use.

You’ll find the Offers tab at the navigation bar at the bottom of the Google Play Store app. It will initially be available in the U.S, India, and Indonesia in the next few weeks and will roll out to more countries later in 2022.