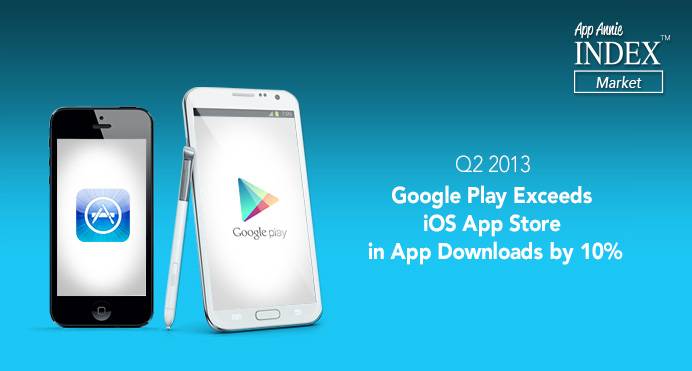 Android just seems to be raking in the numbers this quarter, giving Apple something to really worry about. The latest figures from App Annie Index reveal that as of the second quarter of 2013, Google Play store has outmatched Apple’s iOS App Store by as much as 10%. It also showed that Google Play is solidifying it’s foothold on emerging markets.

App Annie Index does a quarterly review of the two app stores and analyzes the download and revenue figures based on country and app category. In the figures relating to countries, it is interesting to note that India, Russia, and Brazil are in the top five countries in terms of downloads from Google Play. The top five countries comprise over one third of the total Google Play downloads in Q2 2013, revealing the importance that Android’s open platform is playing in emerging markets today.

In terms of types of apps, games are the most downloaded category in both Google Play and App Store, comprising roughly 40% in both markets. What is more interesting, however, is the fact that games comprise 80% of Google Play’s total revenue, compared to 75% in the App Store.

Not everything is a bed of roses for Android though. One area where iOS App Store still has Google Play beat is in app monetization. The App Annie Index shows that App Store genered more than twice the app revenue than Google Play. Maybe it’s the fragmentation, or the piracy, or many other things. But if these figures, which have steadily been rising for the past years, are any indication, Android might still get that in its pocket, sooner or later.