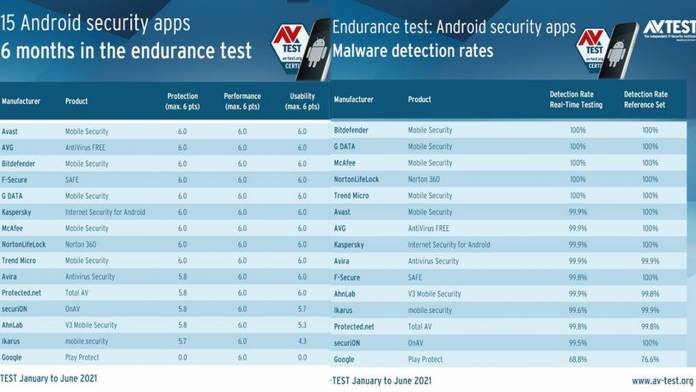 There have been instances in the past where Play Store has been bypassed by malicious apps only to be found wanted later on by independent security firms. Google’s built-in malware defense system has once again failed an extensive real-world security test in an antivirus lab test conducted by AV-TEST. As a matter of fact, Play Store ranked last amongst the 15 Android security apps tested between January 2021 to June 2021. The Store could only detect two-third of the more than 20,000 malicious apps it had to deal with.

In the elaborate testing rounds, the security apps had to detect 3,000 fresh malware samples and more than 3,000 other malware samples which were one month old. Only the 5 apps – Bitdefender, G DATA, McAfee, NortonLifeLock and Trend Micro – could detect them with 100 percent accuracy in real-time, according to the AV-TEST.

Google Play Protect could only weed out 68.8 percent of malicious apps in real-time testing and 76.6 percent in the reference set test. Unfortunately, the lowest-rated third-party security app Ikarus too scored better than Play Protect for protection.

In terms of errors in detecting harmless apps as malicious, Google didn’t do very well. It detected 70 apps as not secure – out of almost 10,000 additional harmless apps of the whole lot put up for the random testing.

So the best way to stay protected is to get one of the better-rated third-party apps for your Android device. Relying merely on the Play Protect is not a wise decision, as demonstrated by this extensive testing by AV-TEST.

All the 15 apps did well in terms of battery and resource usage, hence, they won’t be eating on the phone’s battery life – if that is one of your concerns. AhnLab V3, Avast Mobile Security, AVG, Avira, Mcafee, Kaspersky and Bitdefender can be considered for your device if you want an instant recommendation.