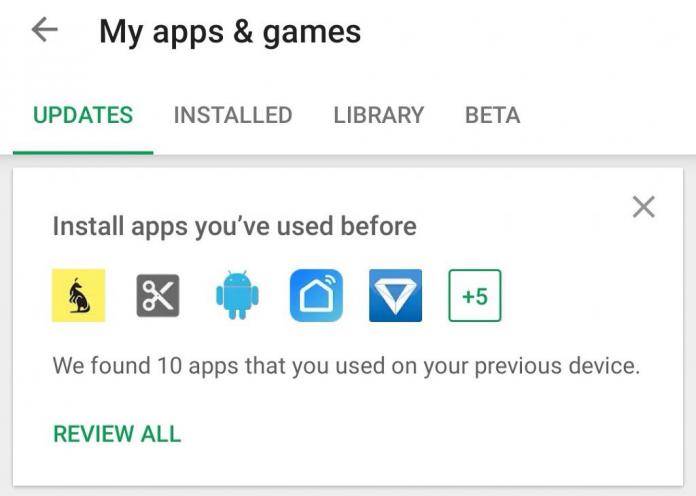 When reformatting or getting a new Android phone, you can look at it as a chance to start over when it comes to apps that you install or as a chore that you will have to re-install these apps all over again. Google wants to help you out if you’re the latter as they re now giving you a list of recommended apps that you previously installed in your older or other smartphone. This seems to be a new feature that they have quietly rolled out to users after testing it out to selected users earlier.

When you restore your phone to factory settings or when you’re starting out with a new Android smartphone and you sign in to your Google account, the Google Play Store will give you a list of apps that you’ve previously installed and suggest that you install these apps this time around. You’ll find it under the Updates section of My apps & games on your Google Play Store page.

Under that, you’ll see a Review All section that you can go to so you can see the list in its entirety. Initially, it only shows icons of the first five apps then a +__ icon, depending on how many more apps you’ve previously installed. The Review All button will let you pick which of these apps you actually want to install in your new (or new-ish) smartphone.

Depending of course on your phone’s internal storage and memory and also whether or not you actually use these previously installed apps, you can choose whether or not to reinstall said apps. If you do have certain apps that you continually use and install whatever device you use, then this is a convenient way of just having them in one list and then picking and discarding the ones you need and don’t need respectively.

Of course you’ll only see if you have this already after you’ve reformatted or when you’re starting to install on a new smartphone. By the time you do either of those, it will probably have rolled out to all users by then.