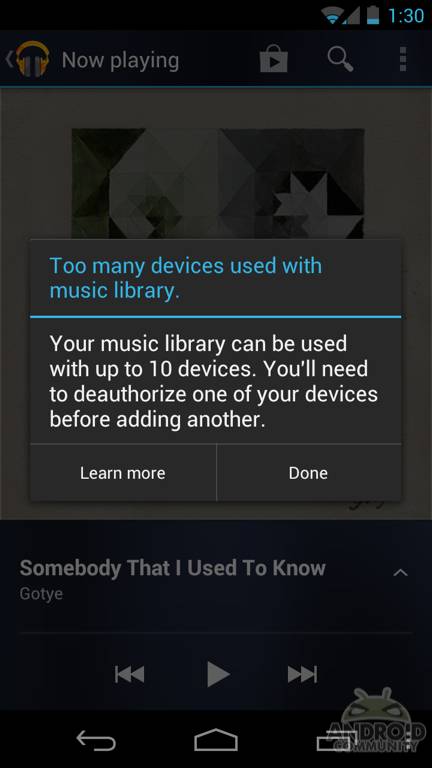 Google’s music streaming option has continued to grow over the past few months since it was officially released back in November of 2011. Originally called Google Music it was recently renamed Google Play Music along with the Google Play Store. While the average user wont run into some of the below issues, many of the die-hard Android users (and there are plenty) will have them, and hopefully Google can make some changes moving forward.

For anyone like me that has multiple Android smartphones, tablets, and media players, that also loves to flash custom ROM’s you’ve surely had the issue from my screenshot above. Previously Google Music was limited to 8 devices and would just close if you reached your limit. They recently upped the limits to 10 but with Android devices coming in all shapes and sizes some might burn through that quite quickly.

If you have a Galaxy Nexus and use Google Music, then decide to flash the latest CyanogenMod 9 or other custom ROM’s when you resign into Google Music that same device will use two activations. I’ve reached my limit of 10 multiple times and had to deactivate the same device on multiple occasions, as I’ve wiped it out and flashed a different ROM more than once. Like I said above this wont be an issue for the average user, but we all know that tons and tons of Android users aren’t what we’d call “average” users.

Next up, we all know Google Play Music allows “unlimited” streaming of up to 20,000 songs to any device be it PC, laptop, smartphone, or tablet. I have two PC’s, two laptops, and way more than six Android devices so that goes out the window quite fast for me — before I start flashing custom ROM’s. On top of that, their so called unlimited streaming appears to have some sort of limits. According to reports from Droid-Life earlier today, users are seeing a message saying “Your limit for streaming music has been exceeded. Please try again later.” From what we understand this is not a 20,000 song limit, but an actual limit where this user that streams tons and tons of music has apparently reached some sort of limit, and can no longer access his own songs, including the ones he’s purchased from the Google Music Store. 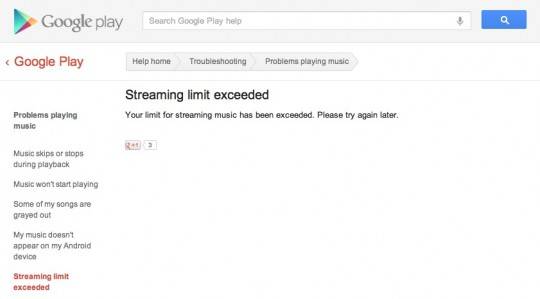 Now this could simply be a mistake, or this user could have actually reached some sort of data, or time spent streaming cap that Google has to this point, not detailed to the end users. I don’t know about you guys but I sure didn’t read the fine print. I just hit go and enjoyed the new streaming options. Does Google Music actually have streaming limits, or was this just a mistake? We are currently looking into the matter and hopefully get some clarification soon.

We know not everyone has an abundance of Android devices like the hardcore enthusiasts, and most wont stream so much music that they reach these types of limits, but if Google is going to impose them they should at least offer an alternative or paid access for those needing more. For now they do allow downloading your Google Music to a PC, or make music available offline for phones and tablets. That is a start but I’d love to see even more options as Google Music becomes a bigger part of my daily life.

Have you reached these limits? What do you guys think?