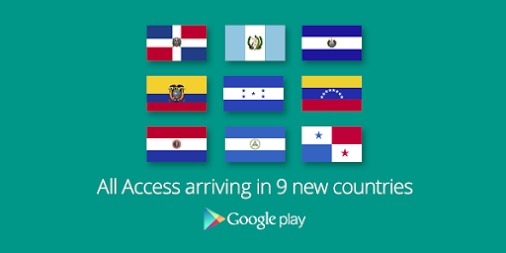 Music lovers in South and Central America now have something more to be happy about. Google has announced that their music streaming service called Play Music All Access (at least that’s what it’s called for now, as we’ll explain later) is now available in 9 more countries in the region, particularly The Dominican Republic, Ecuador, El Salvador, Guatemala, Honduras, Nicaragua, Panamá, Paraguay, and Venezuela.

Just like when it became available in other regions, All Access has an initial 30-day free trial period, where you can check out how it works, what are the available music in their database, and then try out unlimited streaming for a month. Most of its competitors like Spotify, Pandora, Rdio, etc offer the same kind of free trial, and has basically the same features as All Access. But there are rumours circulating that this service will be rebranding to Google Play Music Key, which will be packaged with a new product that will be called YouTube Music Key.

Based on the supposed similar names of the two services, we can assume that the new YouTube product would be like any other music streaming service, except that it would feature music videos, HD concert footage, live performances, covers, remixes etc. And given the large amount of videos that can be found on YouTube, estimated at 20 million high quality tracks available for now, we can expect that this Music Key business might just be a hit. Google Play Music Key would also benefit from that kind of service and following, as it will probably be bundled together.

But for now, our friends in the 9 additional countries in South and Central America can enjoy 30 days of unlimited music. Afterwards, if they want to continue using the service, they would have to shell out $9.99 per month, which is also the estimated cost for the YouTube Music Key subscription. You can download the Google Play Music All Access app from the Google Play Store.