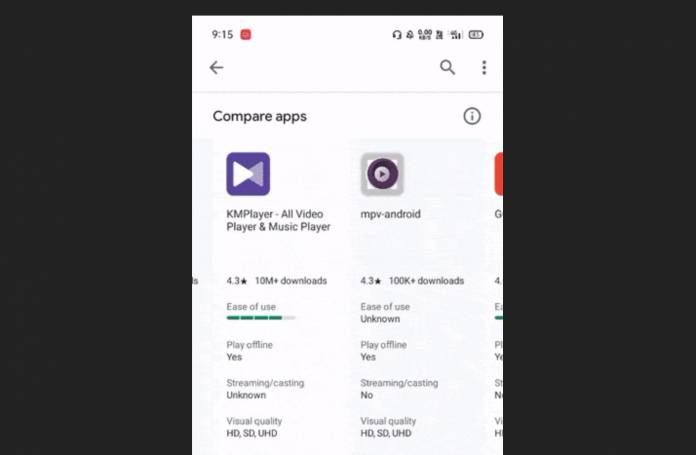 The Google Play Store is a good and a bad place for when you’re looking for an app but you don’t know the specific app you’re looking for. It’s good because there are so many choices no matter what kind of app you want or need (there’s always an app for that). It’s bad because there are sometimes too many choices and you have to do a bit of “research’ first before you finally find one. It looks like Google will soon be able to help you with that as they’re testing out an app comparison feature.

Android Police spotted another experiment that Google Play Store is running for some users (and they do like to test things out every so often). They spotted a “compare apps” section at the bottom of the page in individual app listings. For now, it seems to be appearing only for media players. For example, if you open up the VLC product page and scroll down, you’ll see other similar apps and compares them on things like ease of use, support for offline playback, and other important things for that kind of app.

Most likely, Google has gotten data from app reviews and feedback of the apps as basis for what are the qualities of the app that’s important to users. A side by side comparison of similar apps will be useful for those who may be drowning in all the options that they see when they look for a certain category or specific feature for an app. Even with reviews and all that, it’s sometimes still hard to see which is the “best” for that particular category.

This can also help with the discoverability of apps although at this point, we don’t know what kind of backend they are using for determining what apps will show in the comparison. Is it based on a specific algorithm or keyword tagging or the popularity of a certain app or how many ratings and reviews it gets? Will there be some sort of monetization or ad placement involved eventually?

We don’t know the answers right now with the little information we have and we don’t even know if it’s something they’ll actually be releasing. As mentioned earlier, Google Play Store likes to experiment with features so we’ll have to wait and see.