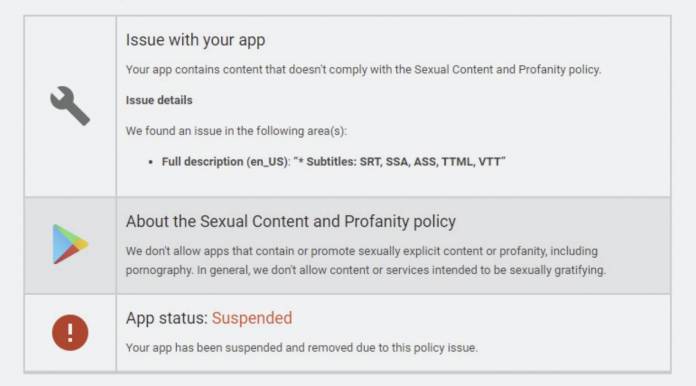 For some reason, Google still hasn’t learned its lesson over letting AI-powered bots run wild when reviewing thousands of apps. Developers have long criticized this decision to put just a tiny amount of human intervention and let the bots decide whether or not to ban an app from the Google Play Store. It’s already 2021 and we still get cases of mistakenly banning an app over some random reason, like having a file format name that has been judged as “sexual content and profanity.”

Developers of the Just (Video) Player app got the surprise of their lives when their app was suspended from the Play Store for violating some policies. It would have been okay if the really had something that was judged to be sexual and profane. Unfortunately, the bots say that it was because of a line in their app description, saying it supports subtitle formats like “SRT, SSA, ASS, TTML, VTT”. Yes the bots detected that ASS was inappropriate even if it’s an actual file name.

In reality, there is nothing sexual at all from the file name. Ars Technica says that it actually means Advanced Substation Alpha, which is a subtitle format that is mostly used in anime. It may not be as popular as the almost standard SRT but it is the de facto standard when it comes to the anime market. We don’t know if those who named the format intended it to be humorous but now it has gotten an app into trouble.

Of course the developers appealed the bot ruling and it was eventually restored to its rightful place in the Google Play Store. But this is another anecdote that developers will use to highlight how stupid mistakes like this are made because of the automated system and the absence of human intervention. Aside from the banning of apps, it is also giving vague and inaccurate reasons for the ban.