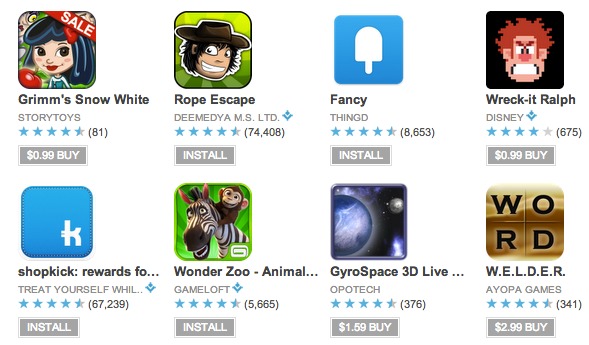 A new report from App Annie has come out, and with it, some interesting insights into the app market. The most interesting piece of information to come from the report is that while Apple may generate four times the revenue of Google Play, Play is growing at a much higher rate. In the last month, Apple’s revenue has actually shrunk .7%, while Google Play has risen an astonishing 17.9% in the same period.

Another interesting piece of data to come from this report is that Japan has passed the US as the number one market for Google Play. This is the first time that the US was not number one in terms of revenue generated from Google Play. Clearly, Android devices using Google Play are incredibly hot right now in Japan, and this report is another indication of that.

Besides revenue coming from the east, Japanese and Korean publishers are also responsible for many of the best-selling and highest revenue generating apps. In fact, seven of the top 10 publishers on Google Play are Japanese or Korean. This is quiet a shift in terms of the market overall.

Games are the highest revenue generating apps, which comes as no surprise. There are plenty of great productivity apps on Google Play, but most consumers prefer to spend their hard-earned money on entertainment. Nine of the top 10 revenue generating publishers on both iOS and Google Play are game creators.