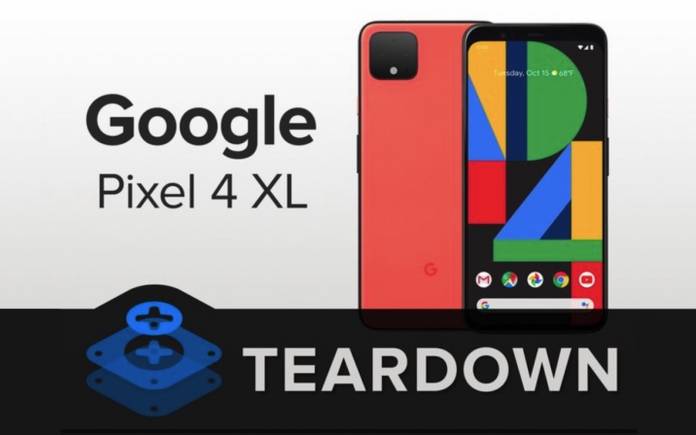 The new Pixel 4 series is currently the industry’s favorite. The Pixel 4 and Pixel 4 XL phones are the latest from Google and we’ve always been interested to knon how the two will fare against the competition. A number of issues have already been reported but they’re only minor. They still need attention though so expect fixes in the coming weeks. On the brighter side of things, the Pixel 4 Camera hit DxOMark with good scores while a Pixel 4 64GB Unlocked on Amazon comes with a free gift card.

Today, the Pixel 4 XL is literally being exposed as iFixit just posted its teardown analysis of the smartphone. JerryRigEverything’s Zack Nelson has not tested the device for durability yet so there’s no related teardown either. IFixit went ahead and discovered the phone is not that repairable.

Opening the unit is easy with some heat. The glue is thin but strong so removing the rear panel is quick. One must be careful though because there is a short cable that connects the rear camera, mic, flash, and the spectral + flicker sensor.

Removing the screws is simple while taking out those stretch-release adhesives can be fun. Remove some brackets to reveal the motherboard, mobile processor, RAM chip, and the Titan M security chip. On the top part is the rear camera system followed by the selfie cam. We also see the Soli chip that implements the Project Soli Motion Sense.

It’s been discovered that the waterproofing available has complicated repairs. Then again, we know the Pixel 4 XL is water-resistant (IP68 ingress protection rating). Repairability Score is only 4 as changing the display may require complete disassembly of the device.