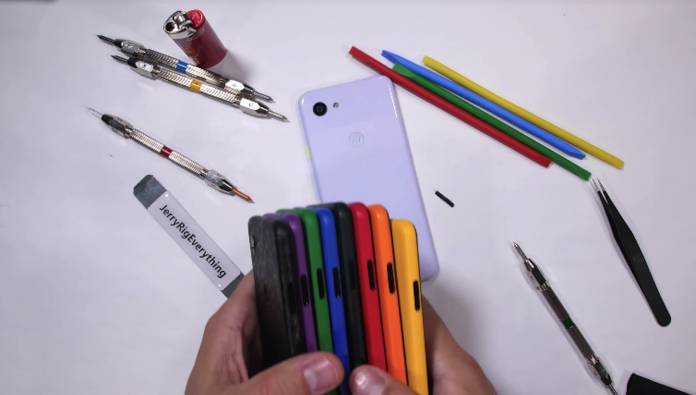 Zack Nelson won’t be late to the game. His durability tests are always published on YouTube just in time. The Google Pixel 3a may have some issues but when it comes to durability, we don’t doubt the phone can last a few years. Compared to the flagship Pixel 3, the Pixel 3a is made of plastic. But is it really durable? JerryRigEverything has tried scratching, burning, and bending the new smartphone. The result? Watch the video below and see for yourself.

The $399 phone is expected to be decent enough. It’s not a premium device but we don’t think it’s a totally cheap phone.

Starting with the scratch test, the screen scratches at level 6 with deeper grooves at level 7. This is normal for a tempered screen. Interestingly, Google decided to use Dragon Trail glass, not Gorilla Glass.

It is highly recommended that you use a screen protector. It won’t be scratched by coins or keys but it’s better if the display is protected.

The selfie camera is covered by the same glass so it also doesn’t scratch. The earpiece is a metal mesh which can’t be removed easily although it may come off over time as the cover is only glued.

The Pixel 3a’s sides are made of super hard plastic. The phone case normally scratches but the device isn’t damaged.

At the back of the phone, more plastic covers the dual LED flash. The 12MP camera lens is covered by glass. The rear fingerprint reader is also covered by plastic so it easily scratches but still not damaged.

Placing the screen under heat results to a white mark that doesn’t go away. It appears after 20 seconds and stays, unfortunately.

Bending the phone from the front and back gives the phone some flex but returns to normal. So is the price of the phone worth it? Absolutely. Just buy protection for the Pixel 3a.