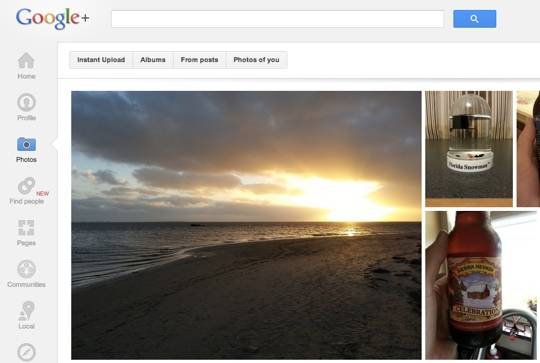 Google appears to be continuing the process of pushing all Picasa users over to Google+. We have seen some of this in the past, however as of today, those surfing to picasaweb.google.com will end up on the Google+ Photos page. Another recent push from Google came when they removed the Picasa link in the navigation bar. Those checking will find an option for “Photos” which also takes you to the Google+ Photos page.

We aren’t expecting Google to close Picasa down immediately, however that time seems to be getting closer and closer. Google has been adding some nice image related features to Google+, one of which was the ability to view others images as a slideshow. Google also allows you to download those same images to to your computer, which should have made sharing with friends and family bit easier. Instead of having to email, just send a link and allow the other party to grab the specific pics they want and/or need.

In the meantime, those who feel they must end up at Picasa can still make that happen. If you type “picasaweb.google.com/lh/myphotos?noredirect=1” into your address bar you will go to Picasa. In fact, if you type that once, you will continue to go there thanks to a cookie. Bottom line here, Google seems to be slowly removing features and access from Picasa while at the same time adding features to Google+.

Otherwise, the one thing that Picasa may still have in its favor is features. At the moment it seems that Picasa is a bit feature rich as compared to Google+ Photos. That as we mentioned will likely be changing over time. With that, do we have any Picasa users that simply cannot make the switch just yet? If so, what is keeping you from making the transition? Me personally, I had been a long time Picasa user but have since switched entirely to Google+ Photos. Of course, aside from some basic uploading and sharing, my needs are on the simpler side.