Google says that India is one of their most active markets when it comes to the use of their Google Photos app and service. But as we are probably already aware of, it is also one of the countries with the slowest Internet and has a lack of consistent WiFi networks. So backing up their photos from their mobile device to Google Photos can sometimes be problematic. So they’re getting ready to roll out a new backup mode called Express to help out users with connectivity issues.

Currently, there are only two options for when you back up your photos to the service. You have high quality which is free for all users and original quality, a full resolution backup, but only the first 15GB are free. The new Express option will give you “free fast backup” but of course, the sacrifice that had to be made here is that it will be at a reduced resolution. Photos will be compressed to 3MP while videos will be compressed to standard definition.

You don’t always need high-resolution photos anyway, so the compressed ones should be fine if you just want to quickly back up your photos without any intermittent connections getting in your way. The quality of the photos will be good enough to print in up to 6 x 8 inches. You will also be able to set a daily cell data limit to back up your photos so you won’t spend all of your data allocations just for that. You can restrict it to as low as 5MB or no data at all if you just want to do back up when you’re connected to WiFi. 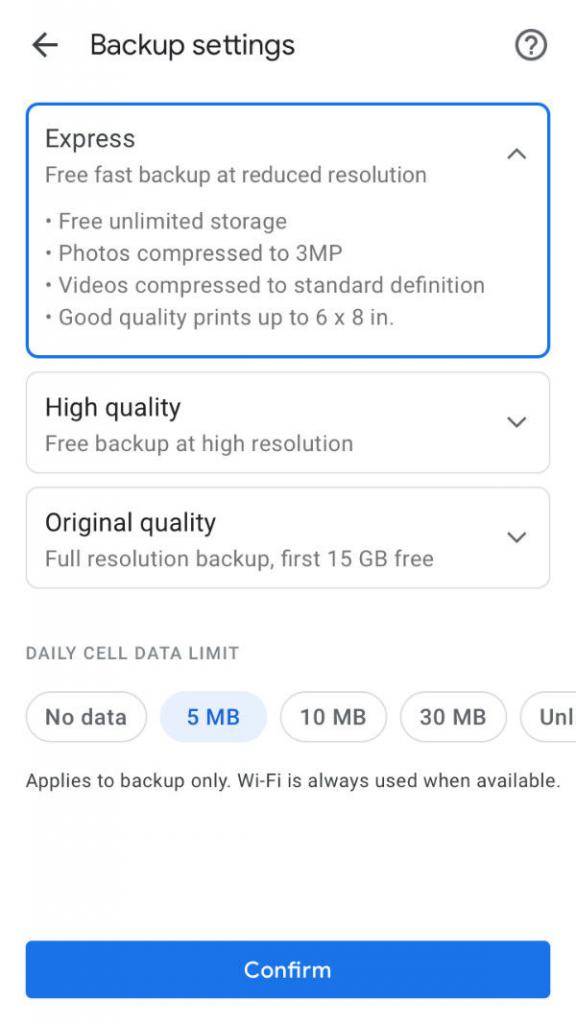 While this is exciting news, of course, the only bad news is that the Express backup feature is only available in India for now. In fact, not all of India has it as they are still bringing it to random, selected users before doing a wider rollout later on. As to whether this will also roll out outside of that region, they will be looking into doing so but only after they complete it in India.