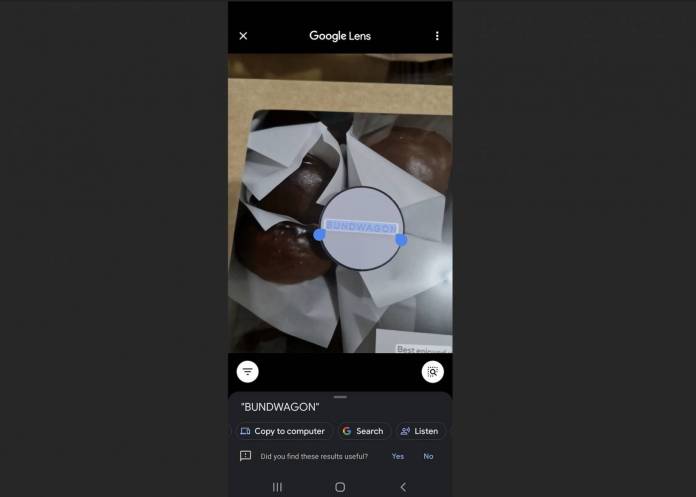 If you’re using Google Photos to back up all your images and videos from your mobile device, this means you may also have some photos there that need a little bit of assistance from Google Lens. Either you need to grab more info about the photo or the text within the photo. It looks like a new UI tweak will make it easier for you to use Lens and the various things you can do with it from within the Photos app.

The change or rather, improvement, on how you access Lens and use it for a particular photo showed up for some users already so it may be a server-side update. The tweak seems to have come up within the last couple of weeks. Basically when you open an item in the Google Photos app and you tap on the Lens icon or if you scroll down to the expanded photo info panel, you’ll see several options there on what you want Lens to do.

When it detects text from within the photo, it will be highlighted in blue. Tap on the text and it will show you various options like Translate, copy it to another app, listen to it as your phone speaks it aloud, search for more info on the Google app or transfer it to your Google-connected computer. These aren’t new options as they were previously available in the Google Lens app as pointed out by Android Police, but having them on Photos itself is more convenient especially if your photos are there anyway.

While Lens is probably not the most talked-about Google tool, lately they have been incorporating it into a lot of their apps. They have previously added some of its features to the Google camera and of course the Search app. Google Photos is an app that will naturally find Lens tools useful so this is not strange or anything. And Google needs to add more tools to the Photos app to make it worth our while despite the looming changes in its storage policy.

It seems that this new Photos and Lens interconnection is showing up for most users. Just make sure to update both apps to the latest version but if you’re still not seeing it, then wait for the switch to be turned on for your account.