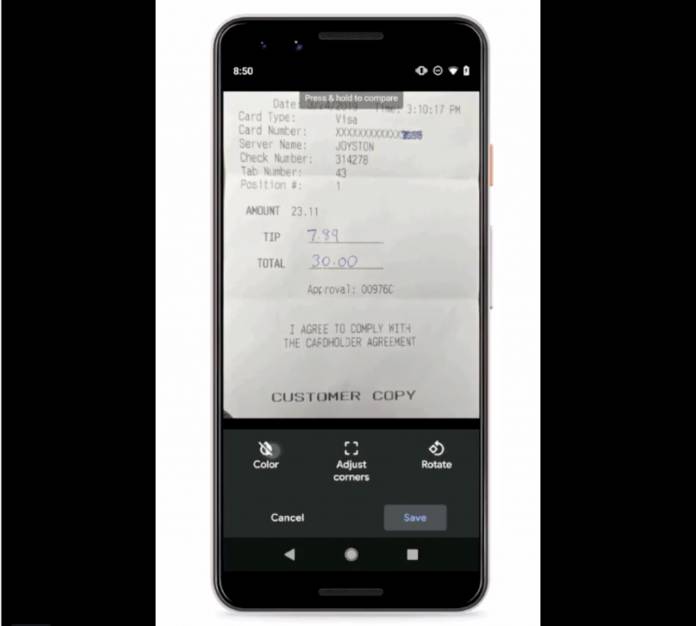 A few years ago, if you wanted to digitally capture a document or a receipt, you needed to have a scanner at your home or office. But with smartphone cameras getting better and better, you now just need to take a snapshot if you need to save it for documentation or for reimbursements and other reasons. The problem is that you need to edit and crop and find a really good angle for it so that it would look like an actual scanned item.

Google Photos now offers you an almost painless way of dealing with things like this. They have now started an auto-cropping feature which should be able to first of all, detect if it’s a document or receipt, and then suggest ways that it can crop the document, remove the backgrounds, and then finally, clean up the edges. It will even automatically brighten it if it detects that your photo is too dark.

When you’re viewing a photo of a document on the Google Photos app, it will automatically rotate the image if necessary and then auto-crop it accordingly. Plus, it will do the other things that we mentioned earlier. These adjustments will actually happen automatically. All you have to do is tap the crop & adjust button which will lead you to the menu where you can just tap on the color, adjust colors, and rotate buttons and it will do the rest for you.

The problem is that the toolset will only pop up if Google Photos detects that what you’re viewing is a document. There is no news yet if you can manually trigger the crop & adjust button when you open a photo that is a document or receipt but Google Photos can’t detect that it is. If that won’t happen, then you’ll have to go back to manually editing the photo if it’s “undetectable”.

According to Google Photos’ tweet, they have started rolling out the update this week so you can expect it to arrive (if it hasn’t yet) over the next few days. And if you don’t have Google Photos yet or you haven’t made it your default gallery app, then you should do something about it. It’s one of the best photo storage apps around so go ahead and download it from the Google Play Store.

New! Crop documents in a single tap. Rolling out this week on Android, you may see suggestions to crop photos of documents to remove backgrounds and clean up the edges. pic.twitter.com/mGggRyb3By