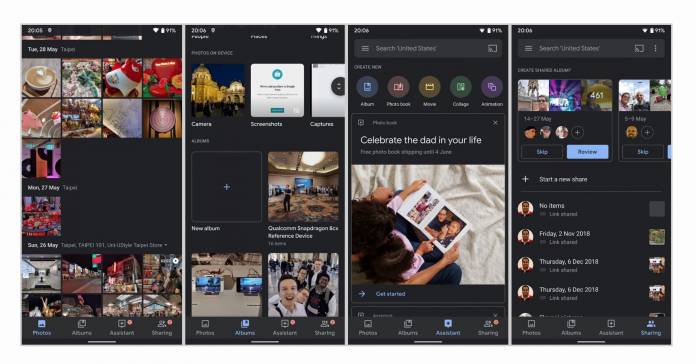 Before they officially launch Android Q later this year with its system-wide dark mode built-in, it seems like Google wants to already give users the option to have a dark theme by introducing it to their first-party apps. The latest one to get the dark mode is Google Photos. Although it isn’t an official update yet with a massive roll-out, some users are already seeing this option in their apps. Having dark themes is something that a lot of users request for, so this will be good news for Photos fans.

A post on XDA Developers shows screenshots of version 4.17.0.249919200 of Google Photos and its dark mode option. Just like previous similar themes in other Google apps, it’s not technically a pure black OLED theme but more of a dark gray which is still way better than the sometimes blinding white background of other apps. The other UI elements have also been toned down to muted colors rather than their bright, colorful ones in the normal version.

Google seems intent on bringing dark modes to most of its apps. We’ve previously seen Chrome, Drive, Auto, and Keep get their official dark themes. Android Q Beta 3 actually rolled out a few weeks ago at Google I/O and so we’ve already seen a user-facing option to enable dark mode across the entire phone, including supported applications.

As to when you will see this dark mode option on Google Photos, that’s still something you have to wait for as there has been no official word yet from Google that they are rolling this out. But given the screenshots we’re seeing, it may just be a matter of days or weeks.

If you’re really excited to see your app go dark, go and check your Photos app if it’s due for an update already.