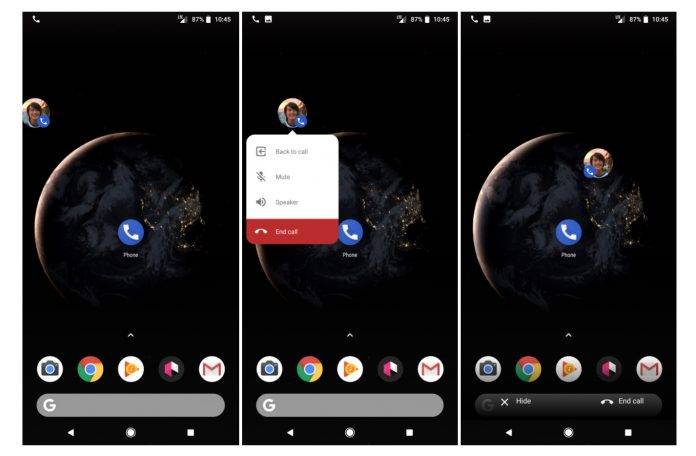 You don’t really look for a lot of features when it comes to your smartphone’s phone calling app. But if you weren’t satisfied with your device’s default app, then you probably wanted to try other third-party apps, like Google’ Phone app. Except, it didn’t really offer that much as well initially. But now that we’re on version 17, they are giving us something major to work on. You now get a floating chat head so that you’ll have easier access to other stuff while you’re still on your call.

The floating bubble is something we’re all familiar with, especially if you use apps like Messenger. In the Phone app, the avatar of who you’re calling is what you can see on the chat head. You still have the in-progress indicator in the bottom right corner of your phone just like before, but now the chat head will give you a dropdown menu when you tap it, and it gives you several options that you may want to use when on a call.

The first option is simple enough and that’s to go back to the traditional interface you’re used to. Underneath it are options to mute the call, put it on speaker, or end the call. You can also hang up by dragging the chat head towards the bottom right of the screen where it says end call. You can also drag it to the left if you want to hide the bubble entirely, in case you need an unobstructed view of your screen.

If you choose to go back to the Phone app, you’ll also see options to add more people to the call, return to the full in-app UI, or bring up the keypad if you need to type up something for the call. The Phone app is only available though for Pixel, Nexus, and Android One devices. If you have one, download or update the app now.