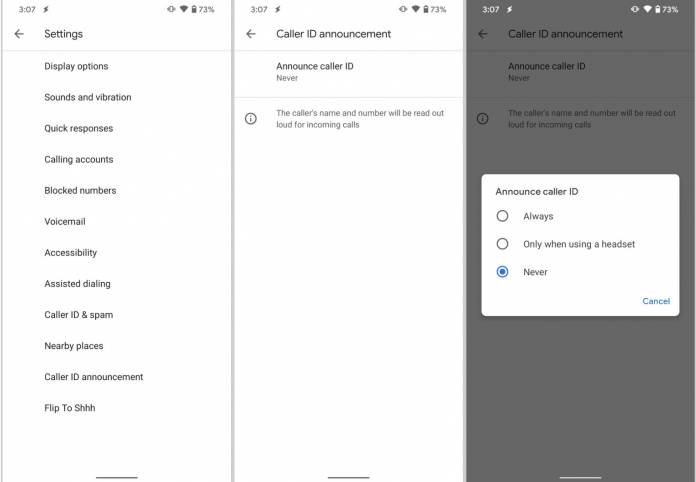 The Google Phone app is a pretty basic app to have on your device but you still look forward to updates and new features every once in a while. The newest one is also pretty basic but it’s important to have for some users. The app gets the Caller ID Announcement feature that, as its name says, announces the name and number of incoming calls to your device when it’s enabled. It’s an important new addition for those who want to know whether or not to take the call without looking at the screen.

XDA Developers previously spotted this feature in an APK teardown last year but finally, we’re getting it as an actual feature on the Google Phone app. The Caller ID Announcement feature was previously hidden in the advanced section of the settings menu but now that it’s rolling out in the stable version of the app, it’s in the main settings already. When you tap it, you get a new page but there’s only one option there, Announce caller ID.

Once you’ve tapped to enable it, it will do what its name says it will do. Incoming calls will get an announcement including the name and phone number. It’s disabled by default but now you will be able to choose between “Always”, “Only when using a headset” or “Never” if you don’t feel like having all those details announced. While some OEMs may already have an alternative to this but given that the Google Phone app is becoming a default dialer for a lot of phones, then it’s a good thing there’s a default feature now.

This feature will be important for those who may have visual impairments or those that will find it more convenient at the moment than actually looking at the caller ID on their phone’s screen. While the Google Phone app is still pretty basic, it has been rolling out some features lately. The last one lets you have the call recording feature by default even for numbers that aren’t in your contacts. This of course depends on your area’s rules about call recording.

The Caller ID Announcement feature seems to be rolling out to Google Phone users already. If it’s not yet available for you, you might just have to wait a bit more.