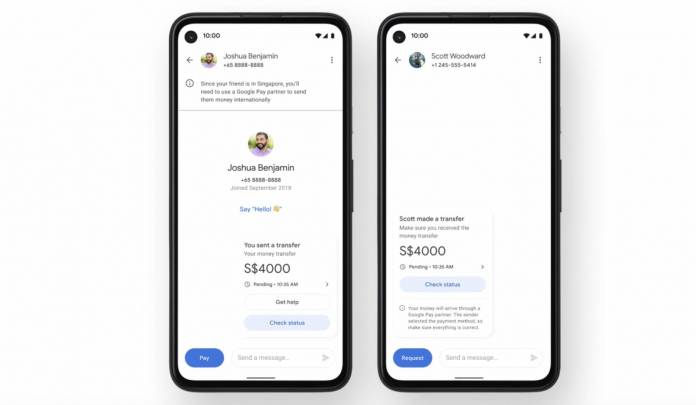 A Mastercard study says that 73% of respondents send money internationally and that number has probably increased during this past year due to the pandemic. Sending money to another country isn’t as easy as it sounds unless you have PayPal. Google wants to get a piece of that market as they are now allowing Google Pay users in the U.S. to send money to two countries for now: India and Singapore. This is thanks to an integration with Western Union and Wise.

The integration with Google Pay and Western Union and Wise is now live so if you live in the U.S, you will be able to send money to family members or colleagues that live in India and Singapore. Search for the Google Pay user that you want to send the money to, tap “Pay” and choose either of the two connected financial institutions mentioned. Follow the necessary steps which are pretty easy to manage as long as you have bank accounts connected to your account.

Western Union will offer unlimited free transfers until June 16 while Wise, formerly known as TransferWise, will make the first transfer free if you’re a new customer as long as the transfer is up to $500. Google will also not be levying additional charges for its customers, at least for now. This partnership will help these companies expand their presence in more countries and compete more aggressively with PayPal.

This expansion comes after the redesign of Google Pay and the sunsetting of the old version of the app and the browser version. Google made personal finance the focus of the mobile payment app and even with these cross-border payment transfers, it’s limited to person-to-person payments only. Google Pay users in the U.S aren’t allowed to send money to businesses in India for now so that may also be one of the reasons.