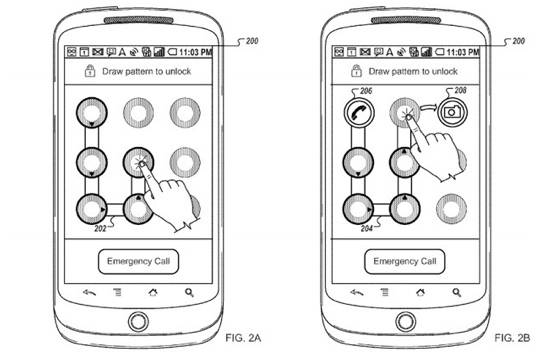 Android users already have several options when it comes to securing their lockscreen. Some of those include face unlock, pin codes and patterns. The catch is that you often have to give up on another convenience when you choose to go the secure lockscreen route. One of those conveniences is quick launching to an app. But with that in mind, judging from details found in a USPTO filing — that may soon be changing.

Details coming from the filing have this looking rather simple. Basically, it appears to be rather similar to the currently available pattern unlock setup. The difference here is that you will be able to switch up (or add-to) that pattern to go directly to an app. The provided artwork details a pattern unlock that is extended with an extra swipe up.

With that extra swipe up the user would be able to launch directly to the camera. While the process seems simple enough to understand, there are still some questions that remain. For one, we have to wonder if Google will allow users to set any app as the one to quick launch or if this will be limited to a select few. Given the current open feel of Android, we suspect the former.

Perhaps the bigger question is when this will come available. We have already seen Android 4.3 launch and there is no sign of this being available. Maybe Google has plans to add this by way of an update, or maybe they have plans to include this in the next major Android update. Of course, on the flip side we also have to remember that just because Google has been granted a patent approval, that doesn’t mean it will ever be rolled out for users.