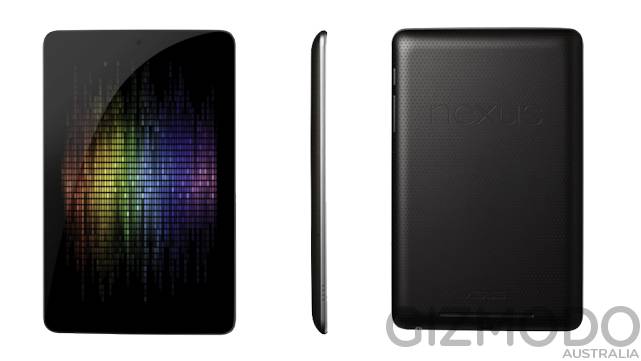 What a fine way to start the Google I/O week off right? It appears that the rumored and rumored Google Nexus 7 tablet has leaked in the wee hours of the morning, finally sharing what looks to be solid confirmed specs and a set of press images. According to Gizmodo Australia that is exactly what we have here.

Apparently all of the specs, details, and even the image above were obtained by a leaked training manual for the new Google slate, and we couldn’t be happier with what we are seeing. Previous rumors and reports have been pretty accurate if this newest leaks holds true. Confirming the quad-core processor and other specs hitting the $199 price point. Here’s what’s been leaked and is being called the Nexus 7:

When we first started seeing rumors about this tablet is sounded awesome and I was hoping Google could pull it off. With help from ASUS and NVIDIA it looks like they’ve done just that, and this tablet is surely to be a huge hit. The Kindle Fire has just been beat at its own game, and everyone else will have to improve specs and lower prices at the same time. This is changing Android tablets, but also laying the groundwork for future tablets. My only concern is the lack of a MicroSD slot for extra storage. The Galaxy Nexus didn’t have one, and Google’s been pushing the cloud options. As much as I’d like the SD slot, I don’t feel I really need one and will be buying that 16GB flavor. Google — take my money!

None of this has been confirmed, but these latest leaks seems to sure up any doubt many have had. We’ll all know the truth in just a few days time at Google I/O. We’ll be there live so you’ll want to check back often for more details. Who will be buying the Nexus 7 if it indeed ends up being a quad-core Android 4.1 Jelly Bean beast at $199?