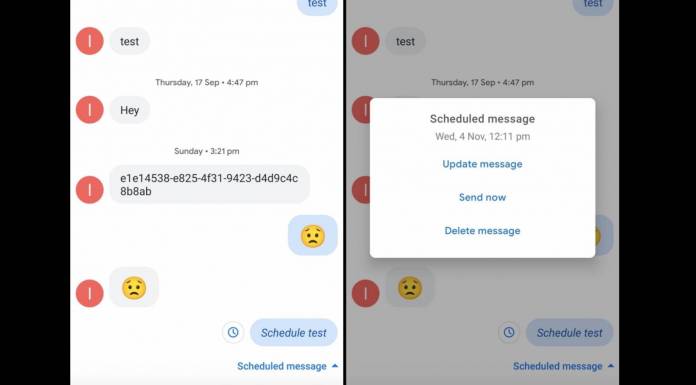 You’ve probably experienced this at one time or another. You have a message you really, really want to send but it’s 3AM. And if you wait until morning, you’ll probably forget about it. Soon there might be a solution for that dilemma as Google Messages seems to be testing out a way to schedule your messages sent through the messaging platform. This is quite similar to the schedule email feature of Gmail. Only select users however are seeing this feature as it seems to be in the early testing stage.

Google has been trying to build its Messages into something that will rival that of iMessage if the RCS chat features are enabled. They’re also bringing more productive features to it like “Message Organization” which will automatically sort your SMS/MMS/RCS into things like “Personal”, “OTPs”, “Transactions”, etc, similar to how Gmail automatically sorts your email into folders. Now another Gmail-like feature is being tested on selected users.

According to 9 to 5 Google, some users are seeing a “Schedule message” feature on their Google Messages. After you’ve drafted your message, tap and hold on the Send button and you’ll get a pop-up message with your scheduling options. There are preset schedules similar to Gmail like “Later today” or “Later tonight” or “Tomorrow” or you can choose a date and time that you prefer. The message will then be labeled as a “Scheduled message”.

You can also change your mind any time, whether on the content of the message or the schedule. Just tap on the message so you get another pop up message. You can also send it immediately or delete it in case you don’t want to send it anymore. The previous options for the tap and hold action, which lets you add a subject line to your MMS, will now be found on the three-dots menu.

There are only a few users that are seeing this scheduled message test so don’t hold your breath if you’re not one of the lucky ones. Hopefully they’ll roll out a beta version soon and eventually a stable version. For now, you’ll have to make do with remembering to send that message at an appropriate time.