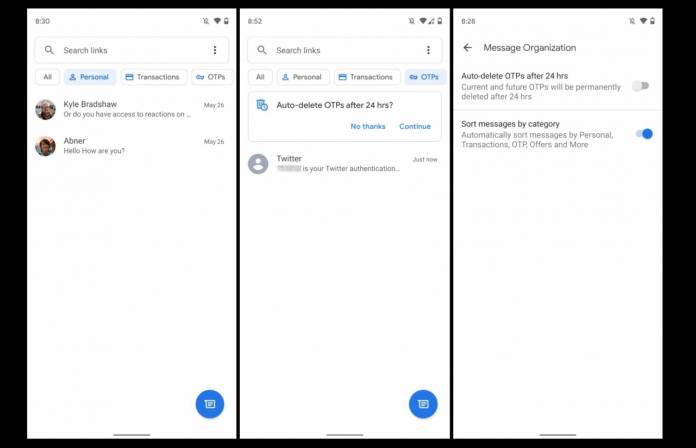 If you’ve been using Gmail for years, you’ve probably gotten used to how they organize and filter your emails. It’s pretty useful and makes life easier for you. Now imagine if that system can also be applied to your probably chaotic inbox then that would take a bit of your stress away. Well, that wish may come true soon as a new beta update for the Google Messages app shows signs that it will be bringing “Message Organization” to your inbox.

According to an APK teardown by 9 to 5 Google, the new beta update to version 6.8 of Google Messages shows an upcoming feature that Google is working on for the app. The new feature that is seen is something called “Message Organization” which will sort the messages in your inbox into several categories, similar to how it sorts your emails in Gmail. This way you won’t have to manually delete or sort through messages from actual people or some automated messages from businesses and other apps.

They were able to get the feature running on one of their devices and so messages were automatically sorted into several categories. This includes things like Personal, Transactions, OTPs, Offers. The string indicates “more” so we may see other categories when they do roll it out. There are also filters below the search bar so you can see conversations in a particular category or all of the categories.

Message Organization shows up in the settings so this means you can enable and disable the feature, in case you don’t feel like having your messages automatically organized into these categories. You will also soon have the option to automatically delete OPT security codes after 24 hours since they are practically useless to you since these passwords only have a short validity period.

Just like with other APK teardowns, we are not guaranteed that this will be the final version of the feature once it rolls out. But having the option to automatically organize your SMS and MMS will be highly useful for those who still rely on these messages. Let’s wait for further announcements from Google regarding this.