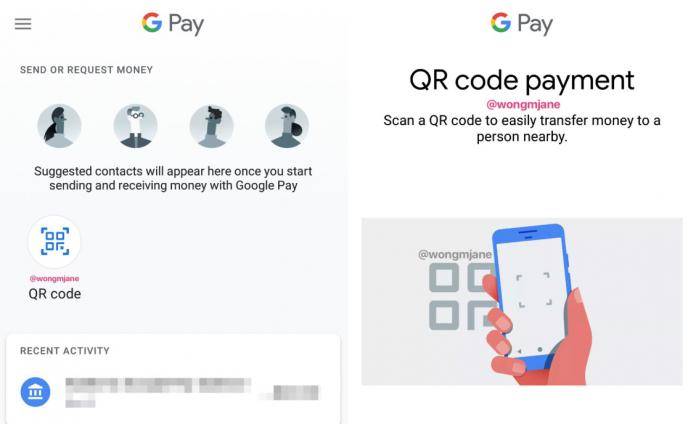 There are several mobile payment platforms already out there that are offering almost the same features and services. So if you want to get a leg up on your competition, you better add more. Google Pay is trying to do just that as the market gets tougher and according to a reliable tipster, we might soon be seeing them add QR codes to their peer-to-peer payments. This kind of feature is currently big in emerging markets like China and sub-Saharan Africa.

Tipster Jane Wong, who has previously brought rumors that turned out to be the real deal, shared screenshots of the reported upcoming new feature. There really isn’t anything new to it, at least based on these screenshots, expect to give users the ability to send and receive payments simply by scanning the QR code on the other person’s phone.

The image shows the Send section of the app and underneath the suggested contacts, you’ll see the QR code. Of course it might be easier to just look for the contact itself, but if you’ve just met someone and you want to do a quick transaction with them, then this is more convenient. If the seller or store doesn’t have NFC, then this is also a quick way to make payments to them or to you.

However, you also need to remember that QR codes aren’t always that secure or reliable. Some third-party QR scanners may carry malware. QR codes themselves have been used to carry to lead people to phishing websites and other “dodgy” destinations. Hopefully, Google will be able to put up safeguards to make sure that transactions will be safe and secure.

As to when Google Pay will roll out this feature and whether it will be available to all markets, that remains to be seen as this is not a confirmed or official announcement.