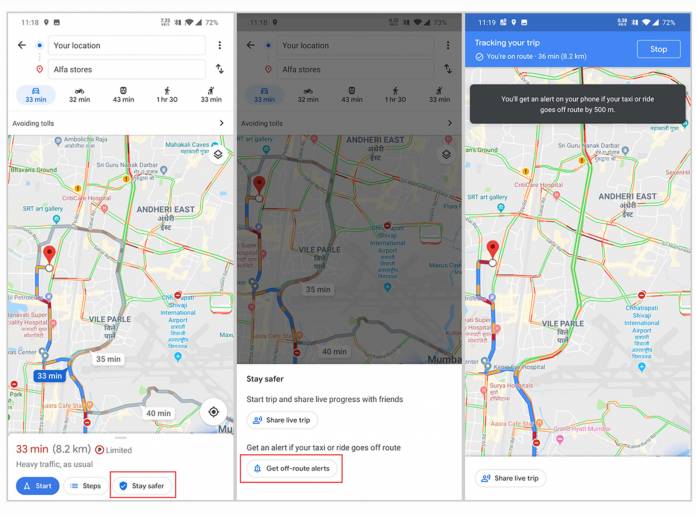 When you’re in an unfamiliar place and you’re taking a taxi, sometimes it’s best to have Google Maps open on your phone so you can be sure that you’re going the right way. Sometimes, the drivers get side tracked or go through another route or worse, they may be taking you for a ride of another kind. Google is now testing out a feature that would send you an alert when the taxi goes off route. However, it seems to be only available in India for now.

Folks over at XDA Developers first spotted this off-route feature. If you’re riding a taxi or any car for that matter and you’re using Maps for navigation, you will get an alert every time you get sidetracked from the suggested course by 500 meters. This will help you stay alert especially when you’re in a place that’s quite unfamiliar to you.

However, this doesn’t mean you’ll automatically get rerouted but you can always converse with your driver if they’re agreeable and ask what’s going on. If you’re the one driving, the feature should also be useful to keep yourself in check if you’re getting off track or something.

Google has been on a roll when it comes to updating its Maps app, from incorporating Waze-like features (reporting of speed cameras, speed limits) to more social aspects like seeing the highest rated items in restaurants you’re going to. Their aim is to make it functional as a navigation app but also to make it more than just that.

The off-route alert is currently being tested in India and hasn’t been seen anywhere else for now. We don’t know yet if it’s a feature that will only be available there or if it will also eventually be tested in other areas.