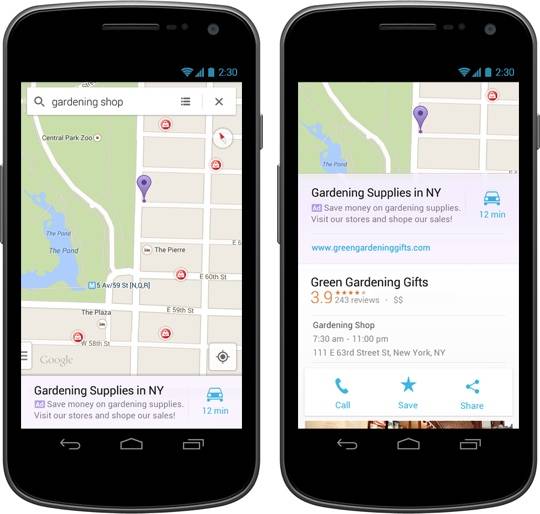 It is no secret that Google makes money based on advertising. Services like Gmail have long included advertisements and moving forward you will likely be noticing some on Google Maps. While this may sound like a terrible move for the average user, it may actually be the opposite. To begin with, these advertisements are based on your search queries. They are also going to be returning results that are local to your location.

That being said, those using the Google Maps app on an Android device will soon see these advertisements along the bottom of the screen. When you fire up the Maps app you still have that same search box up top. The ads that you see will be based on what you are searching for. For example, a test search using “beer” returned a listing for a local brewery.

Anyway, the initial ad appears on the bottom and shows the name/title along with any ad-text and an estimate of how long it would take to drive to that location. Tapping on the time estimate will bring the same detailed directions that you would expect from Maps. Tapping (or swiping up on) the actual ad and you will get further details to include the address, any images, the website and also the option to call, save for later or share those details.

That said, Google has described this as being “attractive for users” because they will be delivering “relevant” ads. Again, they are local and based on your search terms. Our limited testing seems to have provided fairly accurate results, however we can see one potential issue when it comes to distance. You see, the result you are presented with may not always be the closest. Or for that matter, the best option. Based on that we suppose we shouldn’t consider only these results.

Sticking with the local connection and we have also seen recent reports of Google testing something called “hyper-local news cards” in Google Now. Google Now has yet to include any advertising, however we can see something along these lines crossing from Maps to Now. Or perhaps more realistically, we can only hope that once Google brings advertising to Now — it is done in a similarly unobtrusive manner.