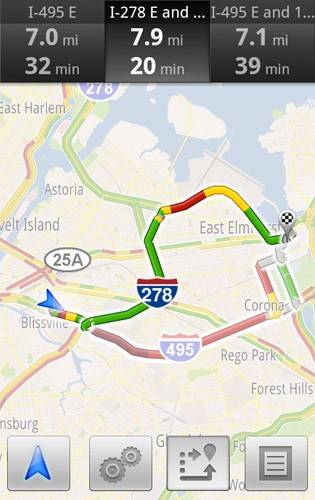 Speaking at the annual geek confab known as South by Southwest, Google VP Marissa Mayer announced that Google Maps is being used by over 150 million mobile map users, about 40% of the apps’ usage.  In addition, mobile users looking to get around used Google Maps as their Google Maps app to navigate over 12 billion miles in the last year.  Mayer went on to say that thanks to Google’s new traffic routing feature, users are saving about 2 years worth of time every day rerouting their driving to get by bad traffic.  Many of the features of Google Maps for Android aren’t yet available for the iPhone, but Mayer says that while that will eventually change, Google goes to the Android platform first because Android obviously has a larger audience (course, the fact that Google powers the Android OS has nothing to do with it, right?).

Mayer went on to say that the future looks bright for Google Maps as the company is always working to improve the interface and make it more intuitive.   Google’s goal is to make Google Maps more contextually aware so that it can analyze a driver’s route and offer suggestions automatically.  Google wants access to other details of a users life so that they can offer real time traffic data and weather conditions that could affect the user. That would certainly help people who need the information on the fly, but will that run afoul of privacy advocates who are worried that Google is becoming too intrusive?

While Google’s motto has always been “do no evil,” but it’s lesser known mission statement is “to organize the world’s information and make it universally accessible and useful.” That’s seems to be what Google Maps is moving towards. It’s made no secret of it’s goal to access every detail of their users lives and use it in various ways to not only turn a profit, but also to provide greater services. And it’s pretty hard to complain when your smartphone is helping you to get around faster and easier.