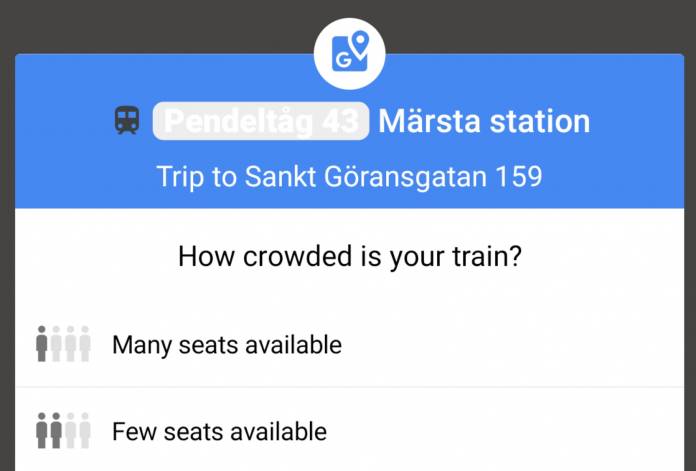 When you’re driving to somewhere, you probably consult Google Maps or Waze to see what the traffic conditions are going there to better prepare yourself. It’s a handy tool that Google has brought and most of the information there is of course, crowdsourced and based on people reporting it through the app. We’ve always wondered if this is something that can be applied to commuting facilities and now it looks like Google Maps is crowdsourcing information about train conditions so we have a better idea of what to expect when we ride one.

Some Android users have reported that when Google Maps detects that they’re using public transport, they get a notification asking your input on how crowded is your train. There are options to choose from like “Many seats available”, “Few seats available”, “Standing room only”, “Crushed standing room only” and “Unsure” if you’re, well, unsure about what to answer. The tipster was from Sweden but some other users (iOS to be exact) have reported this before in New York City, Washington, Tokyo, and Paris.

However, this probably is still in the testing stages as we are not yet seeing the “results” of the crowdsourcing in the commute section of Google Maps. But it’s exciting to see what they will be able to do it. It will be particularly useful for those who are still trying to decide whether to take that train or bus and having information as to whether it’s too crowded or not will help in making that decision.

Previously, Google Maps actually announced that they were partnering with public transport companies globally in order to introduce a feature that will tell you how full a bus or train will be. They probably figured out that it would just be easier to crowdsource the information since people are pretty helpful when it comes to sharing things like this. Or they might actually combine the two strategies to give us a better feature.

Have you seen the crowdsourcing notification on your Google Maps app when you rode a train or bus? Is this a feature that you’d like to have in the future?