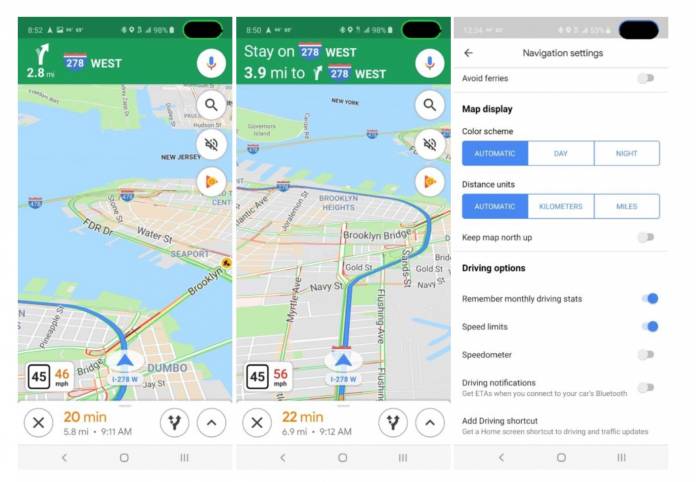 While Google has been introducing a lot of not-so-driving-related things like restaurant menu recommendations and travel features, it’s still a navigation app at its very heart. After rolling out some Waze features last week, some users are now seeing a speedometer right on the app, probably to match the speed limit notification and speed camera alerts that were introduced. Having the speedometer on the Maps app is, of course, optional but at least you can now easily see on your phone if you’re nearing or over the limit.

Users in several countries have already reported seeing the speedometer although it doesn’t seem to be a global rollout just yet. You can go to your Google Maps’ Navigation Settings and under the Driving Options section, you’ll see a toggle on or off for the speedometer, right under the “remember monthly driving stats” and speed limits toggles. This is a pretty good addition to the other features that they’ve adapted from the also-Google-owned Waze app.

However, if you’re using Android Auto on your car, it doesn’t seem to be fully working with the platform just yet. But if you’re using the Auto app on your phone, then it seems to be working just fine. Google has a long history of not being able to have all its products work together at launch so this isn’t really surprising.

According to Android Police, the speedometer on Google Maps seems like a slow server-side rollout but it’s already been spotted in countries like Argentina, Australia, Belgium, Brazil, Canada, Czech Republic, Germany, India, the Netherlands, Poland, Portugal, Sweden, the UK, and the US.

Expect to see a lot more updates and new features on Google Maps as they try to make it more than just an app to look for directions but more of a hub for various businesses that you may be looking for in your area or wherever you’re traveling to.