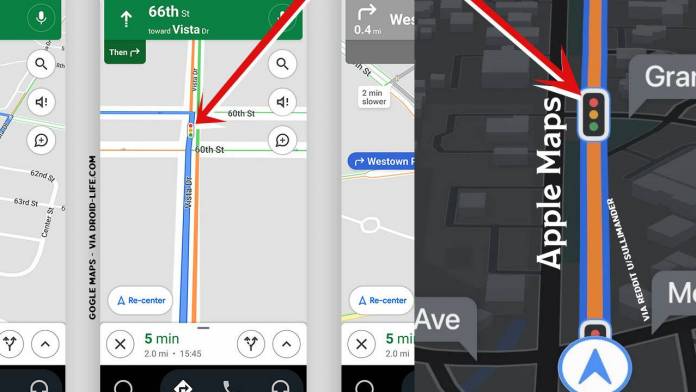 Google Maps may have quietly and gradually released a new feature to some users or they may just be testing it out for some randomly selected users. In any case, some are seeing traffic lights show up on their Google Maps app on their Android devices. It’s still not very visible and not available for a wide range of users so this might be something that they’re still trying out. While we’re probably not doing a lot of driving right now, it’s still a useful feature to have.

Some users opened their Google Maps and saw that there were traffic lights now, whether you’re navigating or just browsing the app. The problem though is that the icons seem to be too tiny to be seen by casual users. Some say that the icons get bigger when you’re navigating but Google hasn’t made any official announcement yet about it nor is it included in the list of instructions yet when you approach one.

Google is actually not the first one to add traffic lights to its navigation app as Apple introduced it to their Maps with iOS 13. They also included stop signs and along with the traffic lights, Siri will tell you when you’re about to approach one to make sure you’re prepared to stop or slow down. Eventually, Google should be adding this as well, if they do roll out this small feature more widely.

Even though they already have Waze, Google is also building up Maps, adding more features to it not just for navigation and for transit information but also as a place to look for restaurants, businesses, and other places in an area you may not be familiar with. Having traffic lights may not be the biggest addition but it is important if you’re in a hurry and want to avoid areas that have a lot of them to slow you down.

This traffic light feature seems to be a server-side switch as it shows up in different versions of Google Maps. Let’s wait for a formal announcement soon if they do decide to push through.