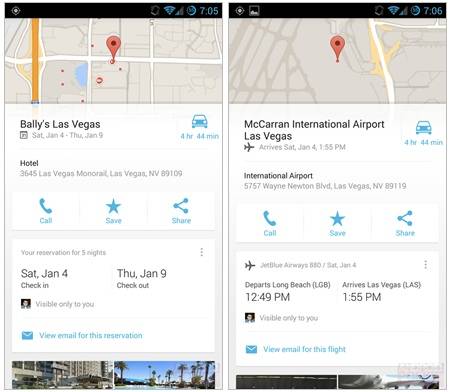 Google has recently begun rolling out a new version of Maps. This one bumps the version from 7.4 to 7.5 and it looks like it has brought Gmail integration. While Google has yet to offer a full changelog for this update, reports are beginning to surface. To that point, the mention of Gmail integration comes by way of the folks at Android Police who have offered a bit on how it all works.

It seems the integrations is hidden, as opposed to being an item listed in the menu and/or settings. While hidden though, details will present themselves when appropriate. It sort of reminds us how Google pulls information from Gmail for Google Now. One example here are packages that you are tracking. These are in your inbox and Google pulls the details and presents them in a more usable form in Google Now.

With the v7.5 Maps update, Google is doing the same for items related to flights, hotels and restaurants. In terms of seeing these presented, it was said they will show when appropriate. That basically means that if you have a flight reservation leaving from a specific airport — you will see the details in Maps if you navigate the map to that area. Similarly, the same seems to work for hotel and restaurant reservations.

While this all seems to be solid enough in terms of details and how it all works — there could still be more to the update. Those extra details may be discovered by users, or may remain hidden until Google drops a full changelog. In addition, there hasn’t been any mention (from Google) in terms of availability. This discovery has been made by a user in the US, and as we have seen Google do in the past, they often rollout new features first in the US and then expand later.