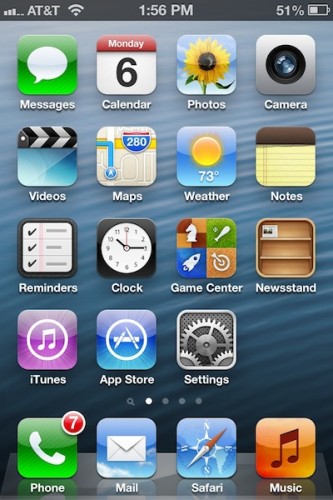 Today some rather interesting news has just hit the web regarding Apple and their iPhone going after Google again. This week Apple has released their latest beta for iOS 6 — the OS version that will grace their next iPhone. Along with the new release is the complete absence of YouTube. Google’s obviously popular application has been completely removed from iOS for the first time since the original iPhone debut in 2007.

This unusual news is just hitting the wires and you can read more over at our sister site SlashGear where they’ve got full details. Obviously Apple has been attacking Google and Android almost everywhere they possibly can. From endless pointless lawsuits, patent issues, and now this. They recently removed Google Maps completely from their OS, and developed their own Apple Maps option instead. According to official statements from Apple a YouTube app will “still be available” it will just be a required user download instead of built into the OS. This isn’t a shot at Google, instead only because the licensing deal ended.

Our license to include the YouTube app in iOS has ended, customers can use YouTube in the Safari browser and Google is working on a new YouTube app to be on the App Store.” – Apple

Recent updates to YouTube for Android has been met with huge praises. The new and improved user interface with HD content, artwork, and impressive animations has been a smashing success. Google has continued to improve YouTube into one of their best, most polished apps. It looks like those folks with iDevices will be left out again — all thanks to their creators.

According to multiple reports Google is currently building very similar apps to Google Maps and YouTube, and they will be both available for download on the App Store for those interested — which will be almost everyone with an iPhone. Update: We are also hearing this is actually a good thing, as now Google can make them how they’d like to, and update the apps for the better.

What do you guys think? Are all these moves by Apple getting a bit ridiculous, or is this just a logical step to try and remove the competition out of sight?