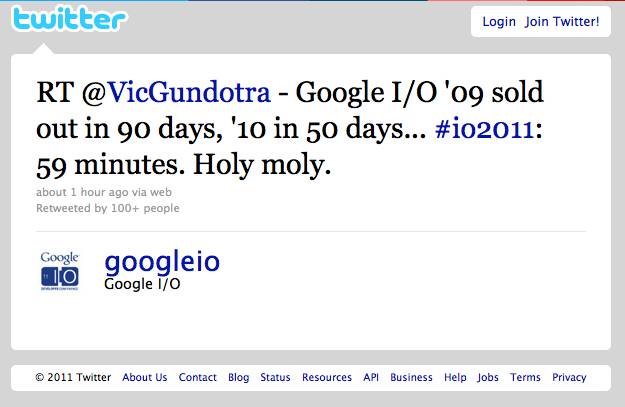 Tickets for the Google I/O sold out today in 59 minutes – more than 1200 times faster than 2010.  The annual two day developers confab, held at Moscone Center in San Francisco, focuses on sessions on building of web, mobile, and enterprise applications with Google technologies such as Android, Chrome, and others.

A few short years ago, in 2009, the conference initially sold out in ninety days.  But the near instant sell out of the conference only underscores the wide reach that the Android platform has on developers who are itching to get an inside look on what’s on the horizon in mobile, web, and Google labs applications.   In addition to the keynotes and topics covered, there will be a wide range of developers showcasing applications based on Google technologies in the Developer’s Sandbox.

And although all tickets have been sold for the conference, Android Community readers can take comfort in the fact that we’ve successfully reserved our spot and will be there bringing you the news as fast as we get it!