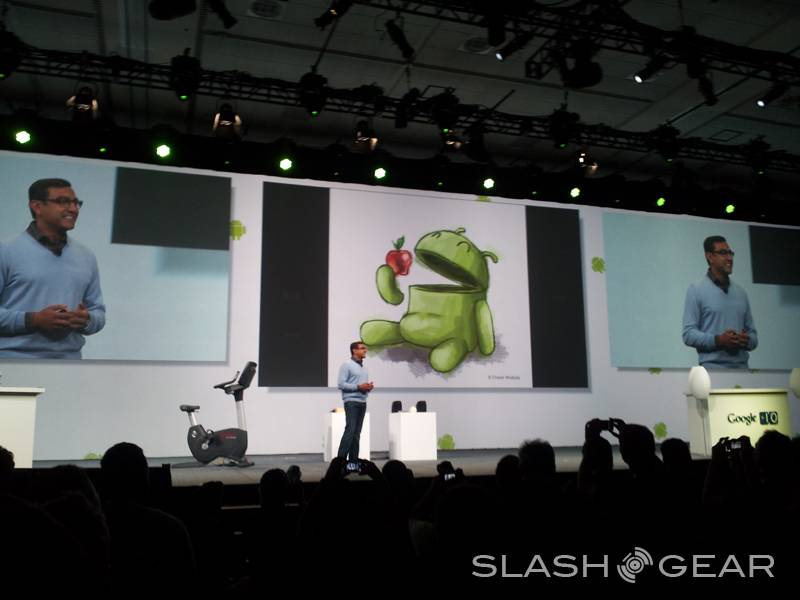 Google I/O 2011 has officially kicked off with the very first keynote having ended just moments ago. Here’s a quick recap of all the exciting revelations that have come so far including an update to the Android tablet OS called 3.1 Honeycomb, the confirmation of the much anticipated Gingerbread successor Android Ice Cream Sandwich, and much more. Continue after the cut for the full recap.

Google started off the keynote touting some impressive figures to its 5000 attendees. They announced that there are now 100 million activated Android devices, with 400,000 new Android devices activated each day, plus 200,000 free and paid apps available in the Android Market with 4.5 billion apps installed. In the past two and half years, Google has shipped eight releases of Android and now there are more than over 310 Android devices around the world.

The update to Android 3.1 Honeycomb adds an improved task switcher that lets you scroll through a list of your most recent tasks. They developed a unique technology that automatically shuts down and restores apps transparently to manages your resources for you and help reserve memory while multitasking. Widgets can now be resized, stretching both horizontally and vertically.

Google TV will be getting Android 3.1 Honeycomb. Developers will soon be able to develop apps for both tablets and Google TV using the same SDK. Additionally, Android Market will be arriving on Google TV starting sometime this summer. All updates will be coming over-the-air for existing customers.

The Android Gingerbread successor was confirmed to be Android Ice Cream Sandwich and is set to launch in Q4 of 2011. It strives to be a unifying platform that works everywhere, regardless of device. They will be taking of lot of good UI elements, including the holographic UI, the new launcher, the new multitasking UI, richer widgets, and advanced apps of their Honeycomb tablet OS and making them available to phones.

Google’s much rumored cloud-based music service has finally launched in beta form. Google may have forgone the record label negotiation process and thus the service now works more like a digital locker where you can store and stream music, rather than a full on iTunes type of music store. Music can be streamed to any of your Android devices simultaneously, and a cache of your most recently played music, can be played on any of those devices even while offline. Several playlist features are also included with perhaps most notably the “instant mix” feature that automatically generates a playlist for you based on your current song preference. So you just pick one song that you like at the moment, and it will generate the rest of your playlist. Request an invite here.

This framework lets developers create Android apps that will allow any of your Android devices to control various things in your home, including light switches and appliances. Along with this they demoed a new home theater system called Project Tungsten. What was especially neat besides being able to control the system with an Android device, was the ability to swipe an NFC-enabled CD case in front of the system to have it start playing music. They have partnered with LightingScience to create compatible appliances that may debut as early as end of the year.

And for the lucky attendees, including part of our AndroidCommunity team, gets to walk away with a free Samsung Galaxy Tab 10.1 tablet. We’ll keep you posted on the rest of the developments coming from Google I/O, so check back for more updates.