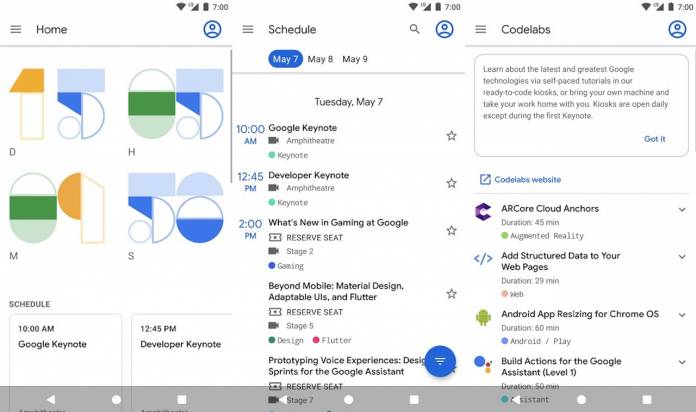 If you’ve ever wondered about how Google developers work on their mobile apps, here’s some information that may answer your questions. The Android Dev team has recently released the source code for the Android version of the Google I/O 2019 app. Of course, there is no other version available but the code will be helpful for developers to understand how the app has been modified. The 2019 version is particularly important because of the major modifications and new functions and features.

The Google IO 2019 app for already features some Android Q functions like Gesture Navigation and Dark Theme. The app supports gestural navigation fully. Try going back to the home screen using gestures. Make sure though you extend the app content to draw edge-to-edge and that it can handle any conflicting app gestures as detailed HERE.

The Google-developed app can be set to Dark theme to improve visibility and reduce power usage. Simply set the theme with this code:

The Google I/O 2019 app shows an improved schedule screen delivers a solution to previous performance and usability issues. You will notice the schedule UI is now single stream so it can only render visible content. (See commits 1 and 2.)

The redesigned app also features a search feature. The Full-Text Search feature of the Room Jetpack has been used so important data are regularly updated and fetch from a server. The effect is search results are shown instantly.

Navigation component is added to make the new version off the app as a Single Activity app. Implementing the feature resulted in several improvements like all transitions showing at a glance, boilerplate code removed, and Arguments between Fragments statically typed. Other important enhancements include a new Home UI and the Firebase Remote Config. Feel free to explore the code on Github for more information.