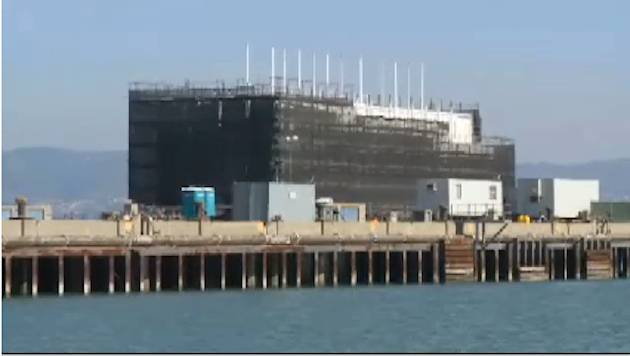 A giant barge floating near Treasure Island in the San Francisco Bay area has many puzzled. What is it? Who’s building it? Why is it there? The questions are endless, and so are the answers.

While many speculated it was a floating data center, local news station KPIX is claiming otherwise. Citing people familiar with what Google is doing, they say the barge amy actually be a Google Glass retail environment. Another source, an “insider” with the Bay Conservation and Development Commission, notes that while the barge is massive and expensive, Google has been coy about their intent. While the Commission has spoken with Google about “hypothetical operations” for the massive structure, Google hasn’t opened up about their intent as of yet.

The issue with a floating store/education center for Glass seems to be the rules themselves. Google first needs to define the purpose and scope of the barge if they intend to dock it, and doing so for an extended period of time could be deemed “bay fill”. Sources tell KPIX that the bay cannot be used for anything that can be built on land, and it seems that whatever is being housed out there fits that criteria.

With a few interesting leaks, it’s important to remember that we still have no idea what that thing is, much less why it exists. What is interesting is that should sources prove reliable, Google is speaking about operations for the barge, which means they intend to use it. The original story noted that Google didn’t have any direct ties to the hangar responsible for the building of this barge, or the existence itself.