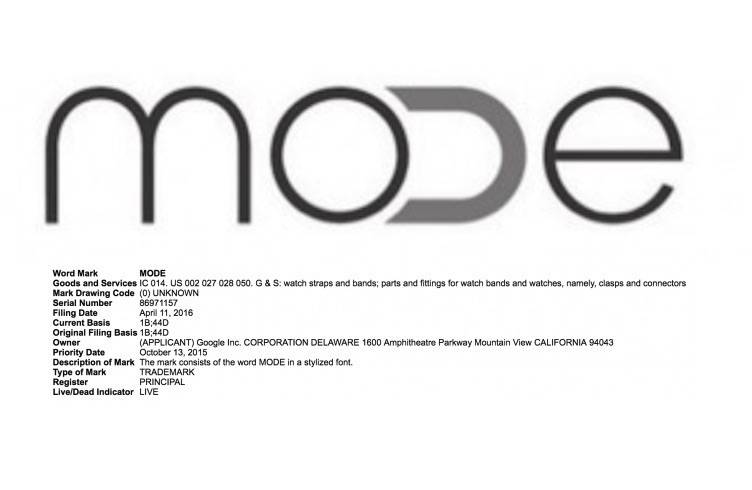 We don’t know what Google plans on doing with this word but the tech giant has been discovered to have filed a new trademark at the United States Patent and Trademark Office (USPTO). An application page was sighted with some information about Google’s application for a trademark for “MODE”. There’s not much explanation what the trademark is for but we’re excited to know what Google is up to this time.

This Google MODE has also been spotted with a logo already. Google seems to be working on a new line of watch bands based on the short description under ‘Goods and Services’ — watch straps and bands, parts and fittings for watch bands and watches, namely clasps and connectors. We’re assuming ‘MODE’ is what a new line of accessories for a wearable will be called. As for what model exactly, we’re crossing our fingers that Google will also introduce a new one. A Nexus smartwatch perhaps?

Google only has Android Wear as the wearable platform but the company has yet to venture into the wearable hardware game. A Nexus branded smartwatch would be interesting. How about a modular smartwatch? That’s another possibility but Google definitely needs to work harder on this area if it wants to beat the other smartwatch makers that already made a name.

The wearable device category has become an industry on its own. Aside from Android Wear, Google needs to prove to us or at least, just try that it can make a new product line that can beat the young veterans in the market. We’ll see, we’ll see.