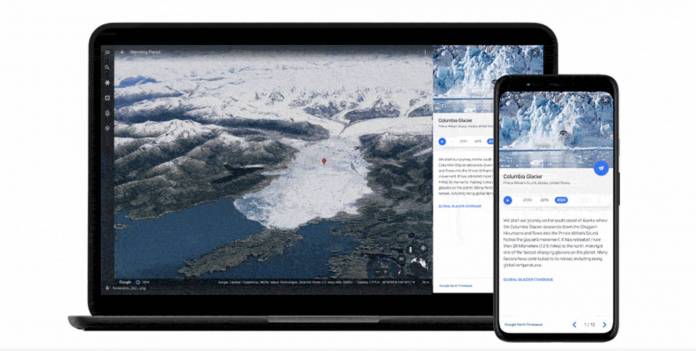 Google Earth is getting its “biggest update since 2017” although there’s just one major thing that you’ll see here. The new thing is that you’ll be able to see a 37-year timelapse of the whole planet or a specific place that you want to see. The 3D timelapse feature shows yearly images since 1984 and you’ll be able to view the shifting landscape from different angles as well. This project is a collaboration between Google, NASA, the US Geological Survey, the European Commission and the European Space Agency.

In the timelapse that you’ll see, each frame is taken from one year of imagery taken from satellite imagery from NASA’s Landsat program and the Corpernicus Project from the EU. It sounds simple enough but that’s a lot of data combined to give you a few seconds of timelapse. In fact Google says they are drawing from 20 petabytes of satellite imagery and combined to create a 4.4-terapixel video.

To see this amazing timelapse, go to g.co/Timelapse and use the search bar to go to any place that you want to see. You can also open the Google Earth app and click on the ship’s wheel to get to the Timelapse. There are also more than 800 Timelapse videos available in 2D or 3D which you can find at g.co/TimelapseVideos. While watching the timelapse, you can also move the camera’s position so you can see it from different angles.

While it is pretty cool to see our earth over the years in a quick video, it’s also sobering to see how much the earth has been changing over the years through four decades of planetary change. The past half century has seen more environmental change than any other point in human history. Climate change is a concept that has been thrown around often enough but it sometimes feel abstract for some that have not experienced the effects first hand.

Google is hoping that the Timelapse feature on Google Earth will help give people a clearer picture that our planet is indeed changing and that we need to be working on solutions that can help mitigate the problems we’re facing. You can now see and explore the feature on the Google Earth app or on the browser.