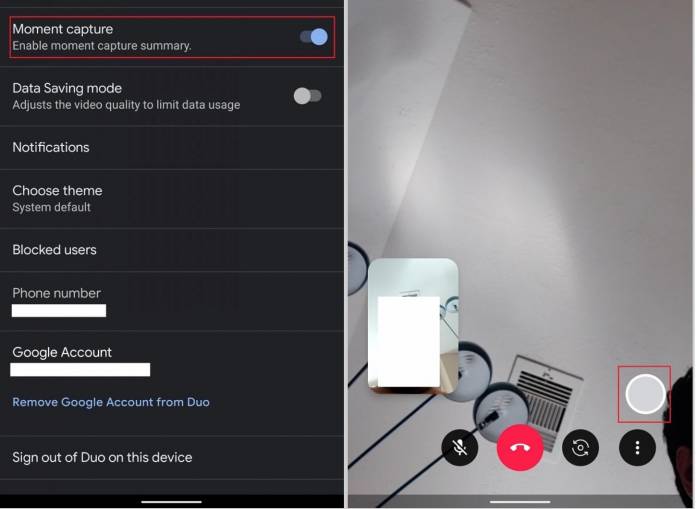 Google has been spending a lot of time developing new features and improving its video calling app Google Duo with constant updates and releases. And unlike its now-defunct messaging app Allo, this seems to have staying power. Version 69 of the app has rolled out now and developers may have spotted an unreleased feature within the app which will make it easier to capture moments and screens when you’re on a video call, without having to use your device’s screenshot shortcut.

An APK Teardown from XDA Developers showed off a new feature that they’re testing called “Moment capture”. They managed to enable it and so they were able to play around with the new toggle in the app settings. If you turn it on, you will see a new button during your video calls. Tapping it will be able to capture the screen that you and the person you’re talking to is able to see. If you’re looking at each other through your respective front-facing cameras, then you can capture both your images with the button.

While you’ve always had the ability to screenshot before, through pressing the power button and the volume down button at the same time, this is a much convenient and maybe ultimately faster way to capture important moments. Even if you toggle the feature off, it warn you that the person you’re talking to can still take screenshots if they toggled it on or if they use their phone’s shortcut.

Google Duo has become a more robust video calling app with the addition of several new features over the past few months. They have added home calling and call reminders. They have also added low light mode for when you’re making calls in dark conditions and of course, the now ubiquitous dark theme. We can expect even more additions in 2020 probably, with this new feature probably making its debut early in the year.

But as with a lot of APK teardowns, we can expect that the feature will not be released as we can see it now. Let’s wait for the official announcement and the rollout of the final version next year.