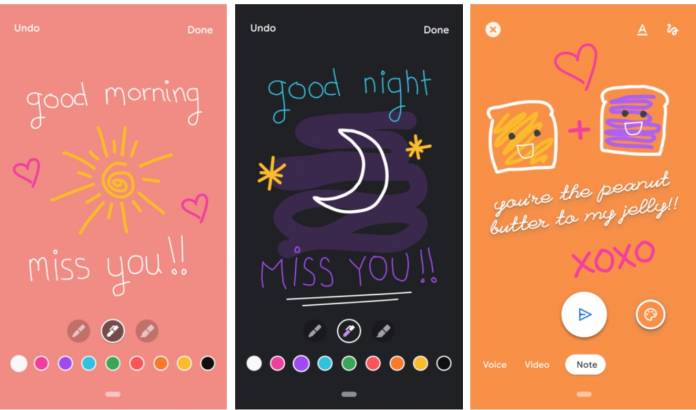 Not all communications can be done through messaging or video calls. Sometimes, you don’t want to or can’t talk to a person at the moment but you’d like to leave them a note. In real life, we can do it on sticky notes or whatnot. But if you’re far away, the next best thing would be a digital version of that. Google Duo’s newest feature lets you draw notes and doodles for your contact so you can leave a more visual message for them.

Google says one of the most popular feedbacks they received from users of their video calling app is that they wanted to be able to do something more visual to connect with their friends. And so the answer is the drawing notes feature that has started rolling out to Google Duo users. It can be used to leave a message to a contact that may not be available for a video call or if you actually didn’t want to talk but just wanted to drop a note for them.

How it works looks similar to the annotation features in Google Keep, according to Android Police. You can choose from eight different background colors, six fonts, and a lot of various pen stroke types. You don’t have to create something pretty or artsy as long as you get your message across. But if you have the artistic talent, yes go ahead and create a masterpiece out of this drawing notes feature.

Google has been making Google Duo better by adding new features every few weeks or so. Maybe this is so it won’t go the way of their now-defunct messaging app Allo. The past few months we’ve seen features like emoji reactions, low light mode, call reminders, moment capture, integration with Android Messages for web, and other useful things you can do with it aside from just video calling and video chatting.

The drawing notes feature has started rolling out already. Update your Google Duo to the latest version to see if you can start doodling and drawing already.